As days of reckoning go, the Republic of Ireland's clash with Germany at Tallaght Stadium is an all-or-nothing defining fixture in the 2022 European Championship qualifiers.

It’s not exactly in accordance with the original script, but a desperately disappointing 1-0 defeat away to Ukraine at the end of October means Ireland have to revert to full underdog mode and aspire to producing a giant-killing of substantial proportions, because only a win will do and it is highly unlikely that Ukraine will be beaten by bottom side Montenegro.

Germany currently roost at the top of Group I, with a full compliment of 21 points from 7 games. Their goal difference is +43, with no goals conceded thus far.

In the reverse fixture in September, Ireland were 3-0 down at half-time and put in a valiant second-half performance to keep the score-line from deteriorating. Vera Pauw’s team were successful in holding the German women to their smallest winning margin of the campaign.

Tuesday night will require more of the same, and then some. A clean sheet is effectively essential for Ireland to have any chance.  To score one against Germany would be something, to need a second would be an exceptionally tall order.

Pauw has taken inspiration from Shane Long’s winner against reigning world champions, Germany, in the Aviva Stadium back in October 2015. She sent the footage of the goal to her players as a reminder that, on your day, you can make unreal things happen.

That night Ireland were dominated for the 70 minutes before the goal and then defended for their lives for the 20 minutes afterwards, but against all the odds, the win was Irish.

And that is one of the many beauties of sport, that some days, the underdog prevails. It’s possible.

Ireland will need to be absolutely resolute in defence. This game is about getting a result and it really doesn’t matter if it isn’t pretty. A win would be a beautiful thing.

We know this Irish team has the capacity to score on the counter-attack. We also know they have goals in them from set pieces. Keeping a clean sheet has to be the priority. That is the platform upon which to build. 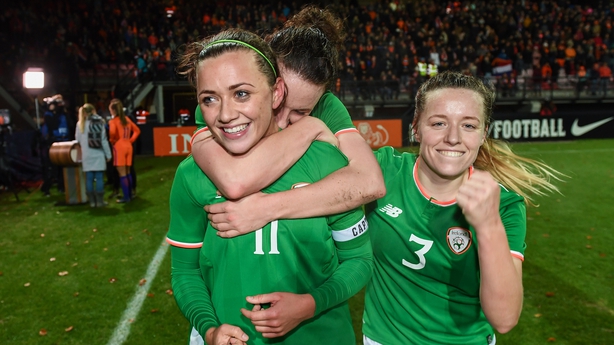 It’s imperative to respect this German team enough to set up to make it as difficult as possible for them to score. Anything other than an Irish win will see one of the most talented groups of players to wear the green jersey sit out the European Championships in England in 2022, and it’s the group that had the best chance to get there.

But this team can take genuine confidence from the fact they have achieved big results against significant opposition in the not-too-distant past.

Three years ago, in November 2017 under the stewardship of Colin Bell, Ireland held the newly crowned European Champions, The Netherlands, to a 0-0 draw in front of a 12,000 sell-out crowd in Nijmegen.

It was one of the best ever performances and results by the Irish women’s national team and it showed we have the players that can compete at that level.

Indeed, Ireland could have gone in front that evening after just two minutes when Amber Barrett raced through the heart of the Dutch defence. That night, 16-year-old Tyler Toland cleared off the line twice in what was a truly epic defensive performance by the Irish.

A late combination between Leanne Kiernan and Denise O’Sullivan could have nicked a late winner but for a bit of luck. The point being here, that many of the players that featured in that game will be present in the Irish squad and starting 11 on Tuesday night.

Hourihan, Caldwell, Quinn, Scott, Fahey, O’Sullivan, Barrett, McCabe, Kiernan all played at least 45 minutes that night, and they all have more football at a higher level of the game, in them since then. There is much stronger depth in the panel since then also.

This team and squad is better than it was that night in Holland, and whilst Germany are at an incredible level, Ireland can and must believe in their potential to get the result they need.

They won’t hear the Irish fans in Tallaght Stadium cheering them on, but every one of us will be rooting for them.

Kenny needs time but he must learn to adapt

Wembley win would be welcome twist in our English saga