With nine different goalscorers, including Patrick McEleney, who also provided five assists, his players gave Dundalk head coach Filippo Giovangnoli an early birthday gift ahead of his turning 50 on Tuesday.

Not surprisingly, this marked a record victory in the 100th staging of the competition.

Dundalk now join Shamrock Rovers in having reached a record sixth final in a row ahead of the sides meeting at the Aviva Stadium next Sunday.

While this was Dundalk’s sixth game in the same period, Athlone, who finished second bottom of the First Division, hadn’t played since beating Shelbourne in their quarter-final on Halloween night.

Town’s hopes were further hampered by the fact they had three regulars missing due to suspension and injury.

With ever-present goalkeeper Aaron Myles out due to an eye infection, teenager Paddy Martyn came in for a first team debut.

With four changes from the side that lost 3-1 to Rapid Vienna in their Europa League Group B tie at the Aviva Stadium on Thursday night, Dundalk signalled their intent from the off and were ahead after just three minutes.

A route one approach saw McEleney drive the ball long for the run of Michael Duffy in behind. The winger did the rest, calmly sliding the ball past Martyn.

This time McEleney delivered from the left with Duffy again timing his run well to meet the diagonal ball and cleverly loop it over Martyn off his chest.

It got worse for Town within a further four minutes, defender Andy Boyle arriving unmarked at the back post to head home a Duffy corner.

To their credit, Athlone tried to play when they could with Mark Birrane and Dean George, hat-trick hero of their quarter-finals, working Gary Rogers.

But service resumed at the other end as Dundalk punished further poor defending to add a fourth goal just before the half hour.

Once more McEleney was the provider with a cross from the left for John Mountney to score at the back post with a downward header.

Duffy then cracked a free kick off a post ahead of a fifth goal arriving on 36 minutes. Trying to play out from the back, Athlone midfielder Israel Kimazo was dispossessed by Chris Shields. The captain picked out McEleney in the area who casually side-footed past Martyn.

The rout continued with lone striker David McMillan getting in on the act, tapping home Dundalk’s sixth goal on 39 minutes after Martyn could only parry a Duffy cross.

Shields was then given time and space, having collected Darragh Leahy’s pass, to curl home the seventh goal nine minutes after the break.

McMillan then got his second of the game when turning in Oduwa’s low cross in the 64th minute.

It was double figures ten minutes later, McEleney setting up substitute Jordan Flores to find the net with a crisp left-foot drive.

McEleney provided his fifth assist for another substitute, Sean Murray, to make it 11-0 seven minutes from time. 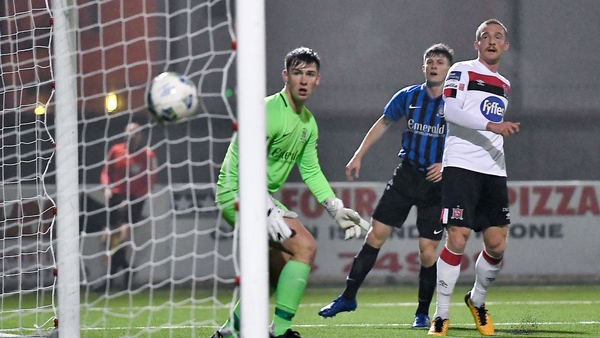