Shamrock Rovers will bring the defence of their FAI Cup title all the way to the final stage after they overcame a blunt Sligo Rovers 2-0 at Tallaght Stadium.

Aaron McEneff netted twice in the first half of this semi-final, as Sligo, who performed in fits and starts, failed to find the target for the eleventh time this season.

The results means the Hoops will face either Athlone Town or Dundalk in next week's decider as their run towards a league and cup double continues.

In search of their 35th cup final appearance, it was the hosts who enjoyed the ideal start as they hit the lead just four minutes in.

Jack Byrne’s free-kick was deflected away for a corner before the same player’s resulting set-piece was flicked into the path of McEneff by Liam Scales. 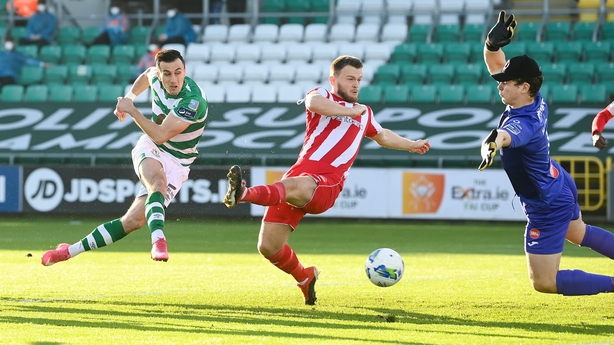 McEneff quickly controlled the ball before turning and smashing it past Sligo goalkeeper Ed McGinty from close range.

Somewhat startled by their poor start, the visitors turned up a really decent chance to level the tie on the quarter hour.

What looked like a mis-hit Lewis Banks effort bounced its way into the path of team-mate Junior. But last year’s top scorer snatched at the chance as he blazed over from 10 yards.

Marshall wasn’t far away from the Hoops’ second on in the 24th minute.

The full-back making the most of slack defending from Regan Donelon who got caught on the wrong side of Marshall. The ex-Glenavon man’s looping header however, sailed narrowly over McGinty’s crossbar.

Stephen Bradley's side then enjoyed a short spell of almost total dominance but couldn’t make it count.

Graham Burke came close but curled one around the Sligo post the half hour after good work again from Marshall down the right.

After a pedestrian opening, Liam Buckley’s charges then began to dictate play.

Ronan Coughlan’s snapshot wasn’t too far off the mark in the 32nd minute, while Banks, now a real threat from right back, saw Mannus fall on his effort from long range.

Now on top, the men from the west spurned their best opportunity of the half.

Again Banks was the menace as he found Coughlan from out wide. All the striker had to do was put the ball either side of Mannus, but the Limerick native’s header was straight at the Northern Ireland international.

All of Sligo’s work was however undone on the stroke of half-time.

Marshall’s ball took a deflection of Niall Morahan before McEneff gathered possession 30 yards from goal. The Derry man drove into the space which opened up in front of him before firing past McGinty for his brace.

The Bit O’Red enjoyed plenty of the play early in the second period, but it was the Dubliners who fashioned the chances.

McGinty was able to throw his cap on Sean Kavanagh’s placed effort from the left side after some intricate passing from the Hoops attack in front of the Sligo area.

While Dylan Watts was unable to make the most of McGinty’s mistake shortly after the hour mark, when the Sligo goalkeeper left his goal line in attempt to keep Kavangh’s cross in play.

The ball coming off the determined Burke at the end line as it made its way to Watts who could only sky his shot from 15 yards.

Coughlan screwed wide, what was Sligo’s first real shot in anger of the second period mid-way through the half. Last year’s beaten semi-finalist continuing to struggle to hurt their opponents despite their improvement.

That struggle went on all the way to full-time as Stephen Bradley’s men were able to see out anything Sligo could throw at them. 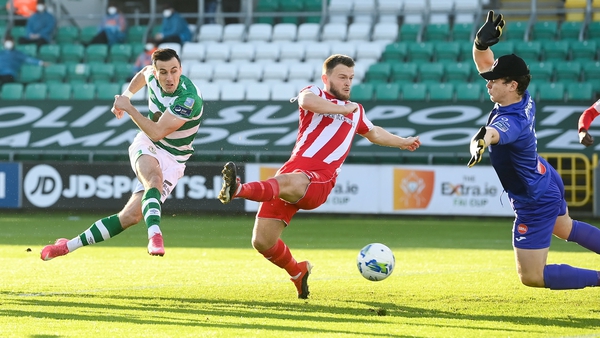