Liverpool's hopes of early progress to the Champions League knockout stages were dealt a blow as Jurgen Klopp’s gamble backfired in a 2-0 defeat at home to Atalanta.

The Reds boss made five changes from Sunday’s victory over Leicester, including altering three of his back four, and paid for it with a lack of cohesion and rhythm which allowed last season’s quarter-finalists to become the first team to win at Anfield in 90 minutes since Chelsea in September 2018.

Even the return of Mohamed Salah after his positive Covid-19 test could not lift the side out of their torpor – or help them generate a shot on target in 90 minutes – as second-half goals from Josip Ilicic and Robin Gosens ensured there would be no option for Klopp to rest players in both of their final two matches.

Victory over Ajax next week would still guarantee safe passage and with December’s schedule, Klopp will want to avoid the nightmare scenario of having something to play for with the final game against Midtjylland.

0 - For the first time since Opta have shot data available in the Champions League (since 2003-04), Liverpool failed to record a single shot on target in a home game in the competition. Neutralised. pic.twitter.com/NEdXaF519J

The introduction of the Williams defenders Neco and Rhys meant, including Curtis Jones, Liverpool were the first side to name three British teenagers in a Champions League starting line-up since Arsenal against Olympiacos in almost 11 years.

Three of Liverpool’s back four had just 23 first-team appearances between them so there was an understandable reticence to come flying out of the blocks as they adjusted to their new surroundings.

But that played into Atalanta’s hands with Papu Gomez having a significant influence on proceedings. 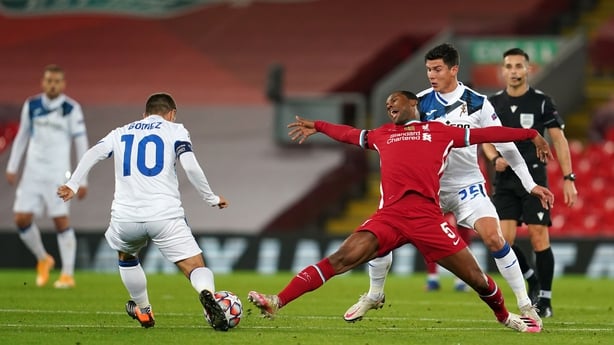 Liverpool played like they were a team treading water and waiting for the second-half cavalry and it infuriated Klopp, who on more than one occasion bellowed at striker Divock Origi for his lack of movement and Kostas Tsimikas, making only his second start since Lincoln in the Carabao Cup, for his positioning.

That they reached half-time goalless owed a lot to Alisson Becker’s sharp near-post save from Gosens’ shot and referee Carlos Grande spotting Ilicic’s obvious attempt to win a penalty when he was touched by Liverpool’s left-back.

Salah’s shot a minute before the break was the hosts’ only effort and it sailed into the Anfield Road End.

Fifteen minutes into the second half Klopp had seen enough and called for reinforcements, sending on Diogo Jota, Roberto Firmimo, Fabinho and Andy Robertson.

But with the quartet stood on the sidelines waiting to come on, Atalanta took the lead when Gomez’s inswinging cross was turned in by Ilicic.

They barely had time to make their presence felt before the visitors’ lead was doubled with the unmarked Gosens side-footing home a Hans Hateboer header almost exactly three years to the day since he scored across Stanley Park against Everton.