Pep Guardiola recognises the onus is on him to resolve Manchester City's goalscoring problems.

City have made an underwhelming start to their Premier League campaign, dropping points in five of their opening eight games and scoring just 10 goals.

The team have still enjoyed plenty of possession but creating clear-cut chances and finishing – with strikers Sergio Aguero and Gabriel Jesus both having spells out injured – have been issues.

"The reason why is the manager, I have to find a way," said boss Guardiola ahead of Wednesday’s Champions League Group C clash against Olympiacos in Greece.

"I have to find a way to adapt the qualities that we have because the same players in different seasons can make different movements and can be in better form or not better form.

"I have to adjust something, to let them feel we can create more chances. It’s in my hands to help them.

"They want to do it and I have to find a way to help them be what we were in the previous seasons."

Despite these difficulties, Guardiola will not be tempted into rushing Aguero back into frontline action too soon.

City’s record goalscorer missed the end of last term and the start of the current season after undergoing knee surgery in June. He was being eased back when he broke down with a hamstring injury last month.

He did make the bench for Saturday’s defeat at Tottenham but he did not get on the field and Guardiola does not want to take risks with the 32-year-old. 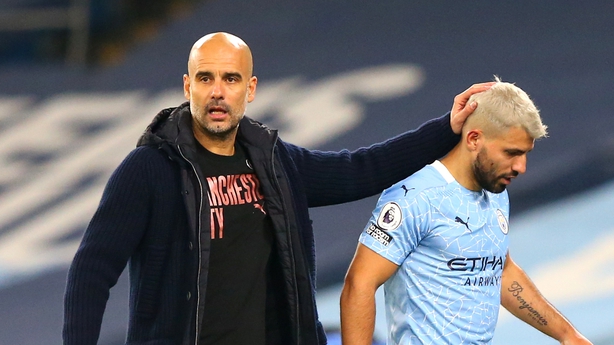 He said: "We want him to come back to training again so he can recover a good feeling in knee, this is the most important thing.

"We wait for him and take it one step at a time. We have many, many games to play this season and we’ll need him. What we want is him to recover in his best condition."

In contrast to their Premier League form, City have looked at ease in their European campaign so far this season, winning their opening three games.

Another victory in Piraeus this week would secure their place in the last 16 for an eighth consecutive year with two games to spare.

"We can (leave) this competition until February, focus on other competitions, especially the Premier League.

"But at the same time we know how difficult it is and, even if we are able to get results, we still have to travel to Portugal and receive Marseille here.

"One step at a time. We’ll try to get through to qualify and at the same time, recover, come back with good feelings that we can create chances and score goals."

Guardiola has given a cautious welcome to news that fans could be allowed back into games in a limited way – up to a maximum of 4,000 – in the near future.

He said: "If they believe it is the best and we can do it, hopefully it will work and nothing wrong is going to happen.

"Everyone is expecting fans to come back to stadiums but if the government have decided, I’m pretty sure they listened to scientists, the doctors and what is the best for everyone.

"We are a lucky profession for the fact that we can do our job. How many jobs are closed and will not reopen again, unfortunately? But of course we are waiting to come back with our fans."