Republic of Ireland goalkeeping coach Alan Kelly has strongly denied he leaked details of a pre-match video that was shown by manager Stephen Kenny to the players ahead of last week's friendly against England.

Kelly opted to leave the camp ahead of the Nations League clash with Bulgaria last Wednesday due to health reasons.

He's an asthmatic, and decided to remain in the UK following last week's fixtures against England and Wales rather than fly into Dublin for the build-up to the Bulgaria game.

On Thursday it was reported that a video was shown to the squad on the day of the England game as a motivational tool.

Two and a half minutes of the video consisted of famous goals scored against the English, from Ray Houghton, Kevin Sheedy, Niall Quinn, Tony Cascarino and Shane Long, followed by 30 seconds of historical context of the relationship between Ireland and England.

The FAI launched an investigation into the video after it was claimed some members of the panel were unhappy with elements of it, but Kenny is not expected to be sanctioned.

On Saturday evening, Kelly issued his own statement on the saga, strenuously denying he had leaked details of the video to the press and criticised "the narrative and innuendo being created in the media" that he had done so.

"I recently made a difficult decision to put my health first and football second as I continued to work, travel, eat and sleep in camp with the Republic of Ireland national team during the recent international break," he said.

"Covid-19 was present in the camp and continuing to spread from person to person during this period. I made the decision to sit out the last match because the risk was becoming too high for me as an asthmatic. 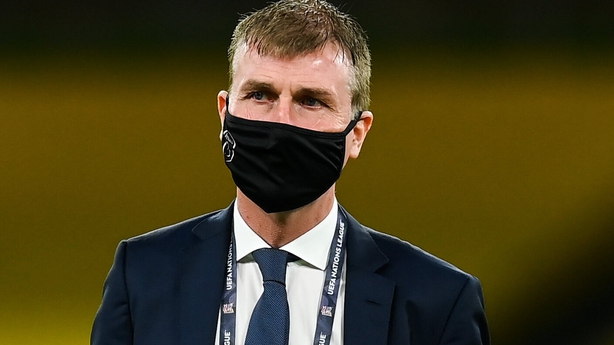 "I am now absolutely furious and disgusted with the narrative and innuendo being created in the media that this decision is somehow linked with stories leaked to the press out of OUR dressing room.

"I can say, with 100% certainty, that I have never bleated to the media in 35 years as a player and coach and I've been in some pretty interesting dressing rooms.

"This narrative is wholly and totally wrong and it should beg the question, who is spreading and benefiting from this? What I can say is it's not me. I have been a loyal servant to Irish football for over 30 years and to now find my name and reputation being dragged through the mud is shameful.

On Friday, Enda Stevens told the Irish Times that the players had not discussed the video at all.

"I think it's disappointing it’s come out to the media, in the way it’s been leaked," he said.

"What happens in a meeting, in a changing room - right or wrong - should stay there.

"I haven’t heard anything about the meeting, the lads in the meeting haven’t raised any awareness to it, so as far as I’m concerned, I don’t think there’s anything in it.

"I don’t think any players even noticed, because nothing’s been said. We have a WhatsApp group, but nothing has been raised."