Longford Town have been promoted to the Premier Division following a four-year absence as they defeated Shelbourne in a play-off at Richmond Park.

Rob Manley's goal early in the second half settled a scrappy game in which the Reds played the majority with ten men following captain Luke Byrne’s dismissal.

Longford’s top scorer finished from close range to settle a bad-tempered game they had controlled while struggling to create clear-cut chances.

Injury-hit Shelbourne will regret a passive performance for the first hour in which they ceded the momentum to the First Division side and only began to threaten as full time approached.

The tone was set early on as Aodh Dervin was shown a yellow card in the second minute as he caught Shelbourne’s Shane Farrell with a reckless elbow.

Referee Neil Doyle was surrounded by a host of angry Shels demanding sterner action but he stood firm, though it wouldn’t be his final contentious decision.

Luke Byrne was booked for a reckless tackle on Karl Chambers midway through the half and, within three minutes, he was shown a second for pulling down Manley as he prepared to shoot, giving away a penalty in the process.

It was the first moment of quality from either team as Chambers clipped a lovely diagonal pass to set Manley free, and the striker went down as his legs tangled with Byrne’s. 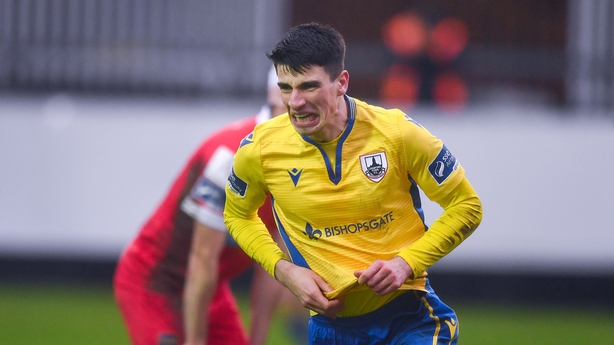 Manley stepped up to take the kick himself but blazed his shot over the bar, while the unfortunate Farrell made way for a replacement defender, Dan Byrne.

Shels, who had set up to contain, sat ever deeper with ten men and Longford found it difficult to find space between two banks of four.

That changed in the second half as Longford came out with more of a spring in their step and began to pick holes in the Shelbourne rearguard.

They found the breakthrough seven minutes into the half as a sustained period of pressure ended with former Red Dylan Grimes finding Manley to force the ball past Jack Brady.

Ian Morris introduced Ryan Brennan, Aaron Dobbs, Jaze Kabia and Brian McManus and they had an immediate impact in getting Shels up the pitch, but they struggled to create.

Kabia had two chances in the final ten minutes, one hooked effort over the ball from the ground and another cleared off the line by a slew of Longford defenders.

And Brennan forced Lee Steacy into his first meaningful save from a tight angle but there was nobody anticipating the follow-up.

The chance was gone and, with it, Shels’ top-tier status.