Peamount United ensured that the 2020 Women's National League title race remains interesting as they closed the gaps on leaders Shelbourne.

Three first-half goals ensured that Peamount's title defence remains very much alive as the final part of the season approaches.

Lucy McCartan got things started for James O'Callaghan's side with a sweet strike before Karen Duggan doubled the hosts' lead two minutes later.

Aine O'Gorman maintained her pursuit of the Golden Boot award by adding a third goal just before the interval and Cork never recovered from that.

Goalkeeper Abby McCarthy was in excellent form and if it wasn't for her shot-saving heroics, then Peamount would have won by a far greater scoreline.

A deserved third win of the season for Athlone as two goals from Emma Donohoe saw them edge past a hard-working Bohemians team.

Donohoe scored inside the opening five minutes to ruin any plans that The Gypsies had of catching the home side off-guard.

Swift counter-attacking from Tommy Hewitt's team saw them add a second goal before the half-hour mark with Donohoe again providing the finish.

Aoife Robinson did pull one back for Bohemians and they played well in passages. but Athlone did enough to hold them off.

Ellen Molloy did it again - scoring a brilliant goal a week before she links up with the Republic of Ireland Women's National Team squad.

The Kilkenny native drilled in from outside the Galway box, out of reach of goalkeeper Amanda Budden, to complete a fine performance from the visitors.

Orlaith Conlon had been first to score for Wexford when she converted from close range after Galway failed to clear a ball into their penalty area.

The conditions didn't help matters but Wexford did enough to get their goals, stay in front and apply enough pressure late on to ensure that they took the three points.

Carla McManus got off the mark for DLR Waves as Graham Kelly's team secured a deserved victory at Jackman Park.

In difficult conditions, Treaty United made a fight of this but goals arrived at key times for the visitors with Avril Brierley getting them started with a finish just before half-time.

There was a lack of sharpness in front of goal from Treaty as Aoife Horgan went close and Gillian Keenan fired over.

McManus, who has had to fight back from injury, netted on 73 minutes before Catherine Cronin made sure of the win with a late goal. 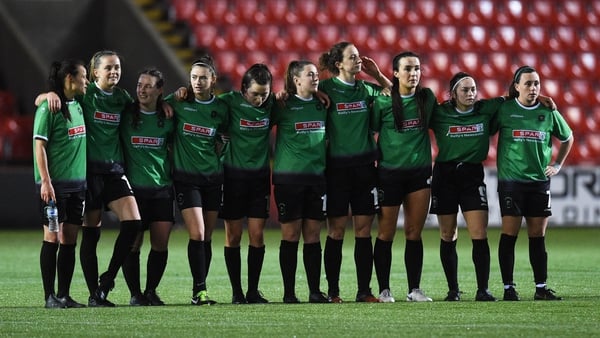