Darren Randolph will call upon the memories of a famous World Cup qualifier victory in Cardiff as the Republic of Ireland attempt to belatedly ignite Stephen Kenny's reign against Wales.

The sides meet in a Nations League B, Group 4 fixture at the Cardiff City Stadium on Sunday with new manager Kenny still awaiting his first win after six games at the helm after Thursday evening's 3-0 friendly defeat by England.

However, a little more than three years ago, they left south Wales with a priceless 1-0 victory, courtesy of James McClean's strike, which booked them a play-off showdown with Denmark and although they ultimately missed out on a trip to Russia, minds will inevitably be cast back to one of their better recent results.

Asked if Ireland could draw on that experience, goalkeeper Randolph said: "Yes, 100 per cent. It's still spoken about.

"Those nights don't come around too often, so it's definitely something to look back on."

Ireland and Wales have gone head-to-head on three occasions since that night with Ryan Giggs' men winning home and away in the last Nations League campaign before a drab 0-0 draw in Dublin in October.

Martin O'Neill was at the helm as McClean ended Wales' World Cup hopes and Mick McCarthy's second incarnation has come and gone with Kenny now holding the reins and hoping desperately for a change in fortunes. 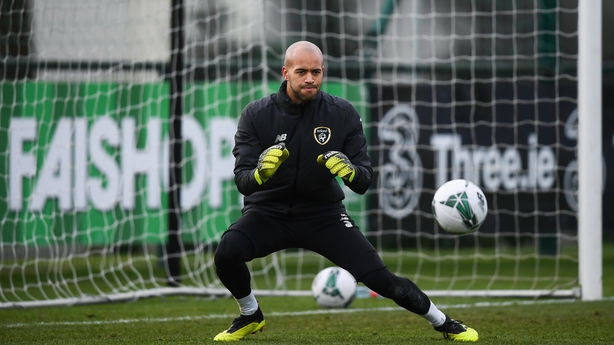 His six games to date have resulted in two draws and four defeats, the most significant of them signalling his side's exit from the Euro 2020 play-off's in Slovakia last month following a heartbreaking penalty shoot-out.

Ireland were arguably the better side on the night in Bratislava and Randolph and his team-mates could be forgiven for wondering what might have been had they managed to see things through at the Narodny Stadium.

The 33-year-old West Ham keeper said: "We weren't going to get probably as easy a chance to qualify as that Slovakia game, but it's been and gone. We played well, we created the chances, we just didn't put the game to bed.

"Hopefully it's still one that hurts people and it's an experience for people to learn from going forward."

Kenny's resources have been severely depleted over the last two months by coronavirus protocols and injuries and that, coupled with his determination to blood a new generation of players and instil more potent brand of football, has taken its toll ahead of clashes with Wales and Bulgaria in which World Cup seeding points are at stake.

However, Randolph said: "After a couple of good performances and good results, you get that feelgood factor back and it's amazing how things can change and people get a little bit of confidence after a couple of wins.

"We have two huge games coming up that we're going into looking at must-win games to get the best possible finish that we can in the group so it doesn't affect the seeding."