Scotland boss Steve Clarke hopes his players have realised their goal of making a nation smile again after ending a long tortuous wait to qualify for a major tournament.

David Marshall's penalty save from Aleksandar Mitrovic sealed Scotland's passage to the Euro 2020 finals and their first appearance on the big stage since 1998.

Marshall produced a great stop in the 10th penalty of a shoot-out following a 1-1 play-off final draw against Serbia to give the home-bound fans something to cheer and take their minds off the coronavirus crisis.

"We spoke before the game about trying to make the nation smile on Friday morning. Hopefully they are going to smile tomorrow.

"If we have made them all feel a little bit better about themselves, about the country, that's great.

"We have been building slowly. We have spoken often about positivity in the group and tonight you saw the rewards of that." 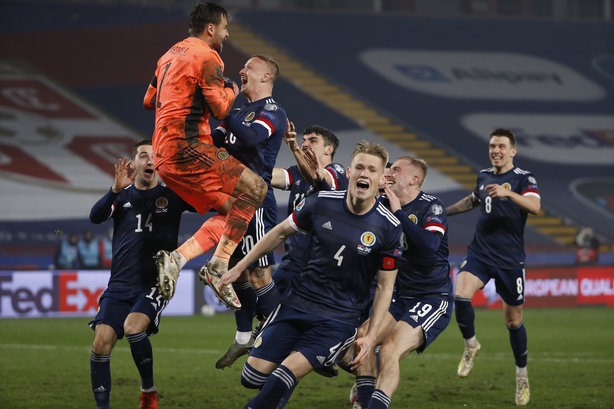 Scotland play in Slovakia on Sunday and Israel three days later as they look to hold on to top spot in their Nations League group and potentially earn a second chance to qualify for the World Cup finals.

But Clarke hinted he might not be totally strict about his players' celebrations.

"Obviously we will prepare properly for the two games coming up because they are very important games," he said. "We want to win the section and qualify as winners in that as well."

He added with a laugh: "But if we are going to have a little celebration it will remain strictly private and confidential."

Scotland reached the final with a shoot-out win over Israel and they again converted all five penalties in Belgrade.

"Unbelievable the character they showed and they got their reward when we got to penalties and they kept their nerve again," Clarke said.

"Two big games - that's twice that group of players have held their nerve and it was a deserved victory. I know penalties can be lucky but over the course of the game, especially the 90 minutes, we deserved to win." 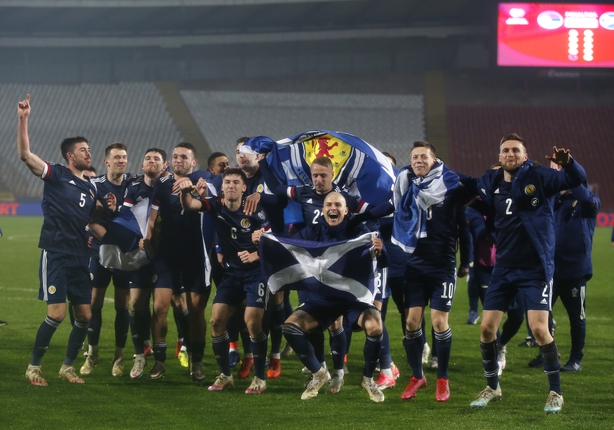 Scotland could and should have won it in normal time after taking the lead through Ryan Christie's excellent strike in the 52nd minute.

They were relatively untroubled until Serbia threw the ball into the box in the latter stages and equalised through Luka Jovic's header 20 seconds from time.

Clarke revealed his calm message to the players before extra-time.

"Keep believing," he said. "Sometimes you get the blow at the end of the game and you can let it affect you, certainly at the start of extra-time

"I told them just to keep believing, keep working hard.

"We talked before the game that we had a chance to get to Euro 2020, at half-time it was 45 and and at extra-time it was another 30 minutes to achieve what we wanted to achieve. And that's what we did."