Five draws in their last six outings connect the Republic of Ireland and England ahead of this evening's friendly international at Wembley (8pm, live on RTÉ2).

The last time either side emerged a winner after 90 minutes was on that famous summer’s day in Stuttgart at Euro '88, when Ray Houghton put the ball in the English net.

It was a goal that inspired a football generation, myself included, and just two years later, we were back in a major tournament, this time in Group H of the Italia ’90 World Cup and once again, our opening game was against the auld enemy.

Gary Lineker’s early opening goal was cancelled out by a low drive from Kevin Sheedy and so began the era of the drawn games. Better not to lose than not to win.

The status quo remained in the Euro ’92 qualifying group, with two 1-1 outings, before the friendly game in Lansdowne Road in February 1995 offered up a defining moment.

David Kelly’s 22nd-minute goal gave Ireland the lead but the game never reached a football conclusion as, much to the disbelief of everyone at the stadium and the audience who were watching RTÉ's coverage at home, a full-scale riot broke out. 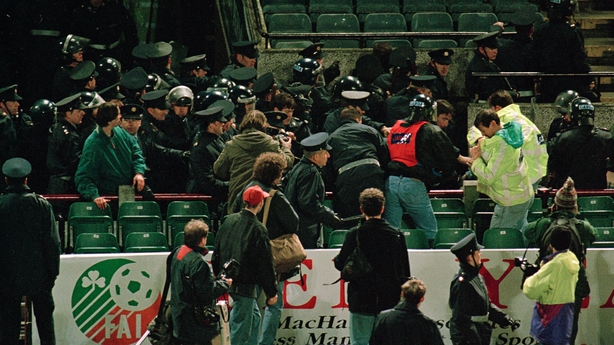 The English fans’ section in the upper tier of the West Stand was infiltrated with members of the notorious Combat 18 organisation and soon the seats became missiles.

The images of those metal and wooden seats raining down on the schoolboy section of the South Terrace, and upon those in the Lower West Stand beneath them, resonated deeply with everyone who was there and those who watched at home.

I was a steward in Lansdowne Road that night and was operating in the Upper East Stand directly opposite the area where events unfolded. There were no mobile phones back then, and people watching on TV at home waited anxiously for their family members to walk through the front door unscathed.

As football fans, we all feel that fear of not winning the game at some point, but this occasion instigated a different type of fear that no football fan should ever have to face.

Subsequent encounters between the sides have served up a 1-1 friendly draw in 2013 before a scoreless stalemate in June 2015.

None have really offered the spine-tingling moments of 1988 and 1990 and today’s encounter is unlikely to reach those dizzy heights either but, in different times now, it’s a game that can offer an insight into the progressions of the Stephen Kenny era.

After the lessons learned and disappointments from the last international window Kenny and his staff have had time to regroup, reflect and refocus.

The football has been decent, the philosophy is bedding in, mistakes will be learned from and the vision must focus on finishing. There’s a school of thought that if you keep doing the right things, the goals will come. But there also comes a point where the goals must come.

Losing Aaron Connolly to a mild hamstring strain, picked up in training yesterday, is a blow but this is the nature of international football and it gives the opportunity to another. The same is the situation for Callum Robinson who also misses out having tested positive for Covid-19. 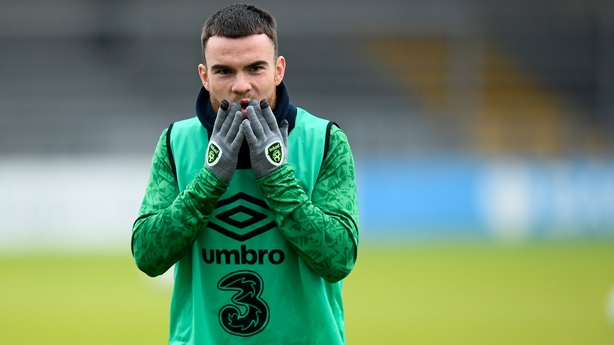 The Saturday and Sunday prior to international camps are spent tentatively monitoring how the players are doing for their clubs. It can be a relief if they don’t start, unless they need the game time. Substitutions are nervous moments, teetering on the tightrope of whether their day’s work is done safely or if the change comes as a result of a knock.

To get them into camp is a relief, to lose them subsequently is a blow. However, England too have their own injury concerns, most notably the injury suffered in training by Joe Gomez, and unfortunately for his club manager, Jurgen Klopp, it may have lingering repercussions.

With the team based in Wembley and training at Barnet FC’s The Hive, the logistics for this game are far easier and will allow more time for Kenny to work with his players.

The former Dundalk manager is clear about how he wants this team to play and has real conviction when he speaks of the culture he seeks to build. As he will know from his successful spells in the League of Ireland, the culture of the team is the absolute bedrock from which eventual success will stem.

When a team is at the coalface and in highly-pressured game-defining moments, the players will default to the standard of training and the culture of the group. That is why he must stay committed to what he believes and be unwavering in his philosophy. The tactical work merely jigsaws into that.

History suggests this game will be one of few goals. Ireland have yet to taste victory on the hallowed Wembley turf. It will bear the eerie echo of an arena devoid of supporters but we’ll all be watching from home.

And while the goals have been difficult for Ireland to come by, and we want to see the new style grow with substance, we can’t get away from the fact that we still love to see a good, solid battle with our neighbours.

In a year where we’ve seen so much that we’ve never seen before, a win against the auld enemy would be a tonic for sure.

Watch the Republic of Ireland's Wembley friendly against England tonight with coverage beginning on RTÉ2 and RTÉ Player at 7.30pm.

Day of reckoning for Ireland not impossible task

Kenny needs time but he must learn to adapt