So, a truncated league campaign reaches its climax tonight with plenty to scrap for.

Finn Harps are looking to pull off the great escape, while Sligo Rovers, Waterford and St Pat's all still harbour hopes of squeezing into Europe.

Read the full permutations for Europe and survival here 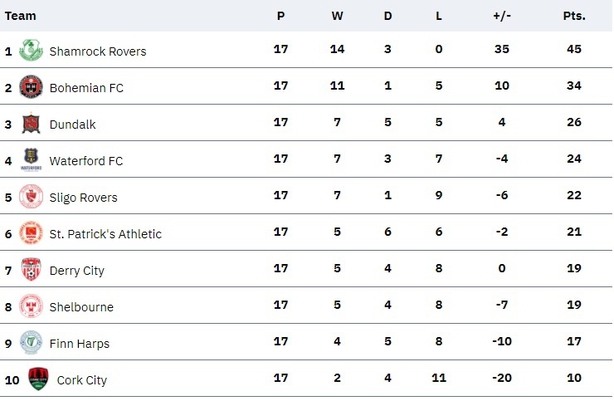 The Lilywhites need a point to seal third - and a place in the Europa League - while Sligo can squeeze into the fourth if they win. That would also get them into Europe if one of the top three go on to win the FAI Cup.

Dundalk: Patrick McEleney (groin) and Daniel Kelly (knee) are out. Dane Massey is still recovering from a hip injury. Chris Shields is suspended while Michael Duffy is a doubt after picking up a knock in the 4-3 defeat to Rapid Vienna last Thursday.

Liam Buckley (Sligo Rovers): "We're looking forward to the game certainly. When the season restarted, if you told us that we’d have the chance to finish fifth and possibly get fourth which could be Europe, and with an FAI Cup quarter-final to come, we would have taken it without doubt."

The Saints can either finish fourth, or one point clear of second from bottom. Such is the nature of this shortened campaign. Bohs meanwhile have second spot wrapped up.

Stephen O'Donnel (St Pat's boss): "We can still finish in fourth position and are aware of what that could mean. The club have a poor record against Bohs in the past few seasons so we are aware that we need to change that and we will be going out to get a result and finish the season on a high."

A draw or defeat for Finn Harps would mean Shels are safe but if the Donegal outfit win, Ian Morris's men will require at least a point. Rovers have the title in the bag but they want to close out the campaign undefeated..

Shels: Lorcan Fitzgerald and Georgie Poynton are both out.

Shamrock Rovers: Gary O'Neill has returned to training and could feature. Bradley has no fresh concerns.

Ian Morris (Shels boss): "We're the team that’s come up last year, the job was to stay up and we need to get a result to stay in the league and we know that. We’ve come off a horrendous one last week. We’ve had extra days to prepare and there’s positives we can take going into it."

Stephen Bradley (Shamrock Rovers boss): "It'll be a difficult game. We know Shelbourne are fighting for points but we go there full of confidence and ready to go and win three points."

Harps must win to give themselves a chance of getting out of the bottom two, though they'll also need Shels or Derry to slip up. A win for the Blues would seal fourth spot - and maybe even be enough to snatch third if Dundalk lose to Sligo.

Finn Harps: Mark Timlin is out, Karl O'Sullivan is a doubt and Leo Donnellan is suspended.

Ollie Horgan (Finn Harps boss): "Waterford will be a huge challenge. They're up near the top of the league for a reason and will be coming here expecting a win."

Fran Rockett (Waterford boss): "This group of lads have always given their all week in week out, so for them it would be massive to round out the season with a win - and more importantly it would be huge to give the fans another win to celebrate with everything going on in the world at the minute, but we are under no illusion of the battle that is in front of us."

Cork are down, while Derry need a point to ensure they don't get sucked into a promotion/relegation tie.

Derry City: The Candystripes have no new worries.

Colin Healy (Cork City boss): "We will be looking for good attitude, a good performance, and hopefully we can go and get a win for the last game of the season."

Declan Devine (Derry City boss): "We need a result, other teams need a result, so there is a lot to be played for. We know what the consequences are if we don't get a result."