Ollie Watkins hit a quickfire double as Aston Villa stunned Arsenal at the Emirates Stadium to return to winning ways.

Dean Smith's side recorded a famous victory over Premier League champions Liverpool earlier in the season and proved that it was more than a one-off as they outclassed the Gunners to leave north London with a 3-0 win.

Watkins, who had helped himself to a hat-trick against Liverpool, scored a second-half double to add to Bukayo Saka’s own goal – with Villa also unlucky to see a first-minute strike ruled out as Jack Grealish and Ross Barkley shone in midfield.

Arsenal boss Mikel Arteta had been calling for consistency after winning at Manchester United last weekend but will be left scratching his head over the international break following the worst performance of his tenure to date.

It was a quiet return to Arsenal for goalkeeper Emiliano Martinez, who left for Villa Park in the summer, as Pierre-Emerick Aubameyang endured another frustrating 90 minutes.

The result takes Villa up to sixth in the table, three points off the summit and with a game in hand on all seven sides above them, while Arsenal sit 11th following a fourth defeat of the campaign.

Villa thought they had opened the scoring with just 48 seconds on the clock as John McGinn brilliantly lashed home from inside the box.

The goal was eventually ruled out, however, after a lengthy VAR check deemed Ross Barkley had been stood offside and blocked Bernd Leno's view of the strike.

Having seen his goal chalked off, McGinn almost presented the hosts with the lead as his underhit backpass saw Thomas Partey burst through, only for Martinez to react speedily and race from his line to save.

Arsenal were struggling to keep things tight at the back and soon Villa would take the lead as Grealish and Barkley combined to free Matt Targett, whose low cross was turned into his own net at the back post by Saka.

Arteta’s side continued to toil, unable to test Martinez before the interval as Alexandre Lacazette headed a Kieran Tierney cross over the bar from seven yards out.

Arsenal’s task was made harder when they had to take Partey off at half-time, the summer signing having suffered a thigh injury in his earlier coming together with Martinez.

Villa started the second half as they had played much of the first and were soon in on the Arsenal goal again, this time Leno turning a Trezeguet effort behind for a corner soon after the restart. 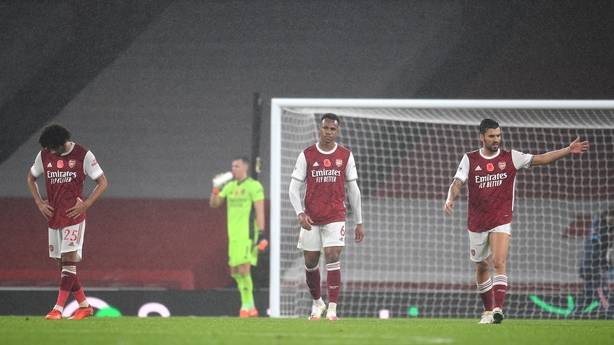 Grealish was next to bring a stop out of Leno, who did not seem to know much about saving the Villa captain’s acute strike.

Arteta turned to his bench, introducing Eddie Nketiah and Nicolas Pepe in place of ineffectual duo Willan and Lacazette.

Pepe, who has scored two in two in the Europa League, came close to levelling with a curling strike that whipped wide of the post.

Despite Arsenal looking to add a cutting edge Villa would soon kill off the game in a scintillating three-minute spell.

First, Douglas Luiz’s fine pass picked out Barkley, whose cross was headed in by Watkins from close-range.

It could have been worse for the hosts had Dani Ceballos not been in the right place to clear Grealish’s strike off the line with the Arsenal defence all at sea.

But it would prove only a short respite as Watkins would double his tally for the evening, finishing coolly past Leno after more good work from Grealish.

Arsenal could not muster a reaction in the closing stages as Villa claimed a fourth league clean sheet of the season, just one fewer than they managed in the whole of the 2019-20 campaign.