Dundalk were dramatically denied a first point of the Europa League group stage after conceding two late goals in a narrow 4-3 loss at Rapid Vienna.

Rapid duo Maximilian Hofmann and Yusuf Demir ensured it would be a fruitless trip to the Austrian capital for Filippo Giovagnoli's side by each striking inside the final four minutes.

David McMillan's 82nd-minute penalty had looked set to earn the Irish side a share of the spoils after goals from Kelvin Arase and Dejan Ljubicic overturned Pat Hoban's early headed opener.

During a hectic end to the contest, substitute McMillan pulled another goal back from the spot deep into added time but the damage had already been done.

Defeat at Allianz Stadion leaves pointless Dundalk bottom of Group B after three matches, while Rapid earned their first points of the competition.

On the back of losses to Norwegian club Molde and Premier League giants Arsenal, the Lilywhites were looking to kickstart their European campaign. 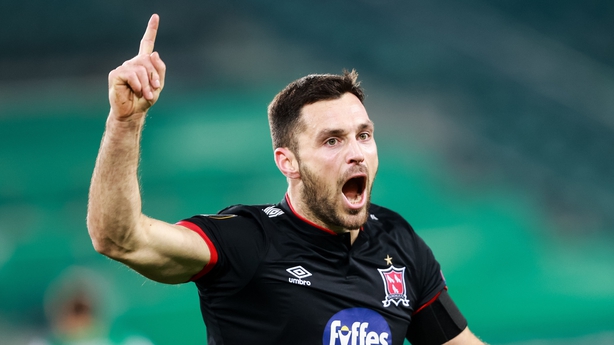 They made a perfect start as forward Hoban headed home a cross from captain Chris Shields inside seven minutes.

After Rapid skipper Ljubicic rifled home from distance to level 15 minutes later, Michael Duffy wasted a couple of presentable opportunities to restore the away side's advantage.

Those misses became even more costly 11 minutes from time when Rapid went ahead through Arase's close-range header, although McMillan quickly equalised with his first penalty of the evening after he was fouled in the box by substitute Mario Sonnleitner.

Greg Sloggett then squandered a free header to put Dundalk ahead before Hofmann nodded in and Demir stroked home to wrap up Rapid's victory.

A frustrating evening for the visitors ended with a consolation goal as McMillan converted from 12 yards with the last kick of the game following a foul on substitute Nathan Oduwa.