Jack Byrne made a return to the pitch on the night Shamrock Rovers were presented with the SSE Airtricity League trophy, but outlined the significant impact Covid-19 had on him physically.

A week after confirmation of their domestic success, 10-man Hoops battled to a 0-0 draw with St Patrick's Athletic to maintain their unbeaten home record.

Byrne tested positive for Covid-19 while on international duty with Ireland for their triple-header against Slovakia, Wales and Finland, and returned to action earlier than was expected as a replacement for the injured Graham Burke.

Manager Stephen Bradley said last week the playmaker was badly hit by Covid, something the player confirmed to RTÉ Sport.

"It hit me hard," he said. "It’s no joke. It’s a serious issue going around at the moment. It was unfortunate that I got a bad dose of it. It knocked me for six.

"For three or four days I was struggling with my breathing. It takes a few weeks."

Byrne has only just recently resumed training after the lay-off and admits it is a relief to be returning to full health.

"I’m just glad to be out the other side and happy to be alive."

The Irish international has been a key figure as Rovers secured a first league title since 2011, and despite the somewhat surreal surroundings of an empty Tallaght Stadium to toast success, is delighted to be part of a championship-winning side.

"It's difficult with no fans or family, but it’s a great night, I’m buzzing." 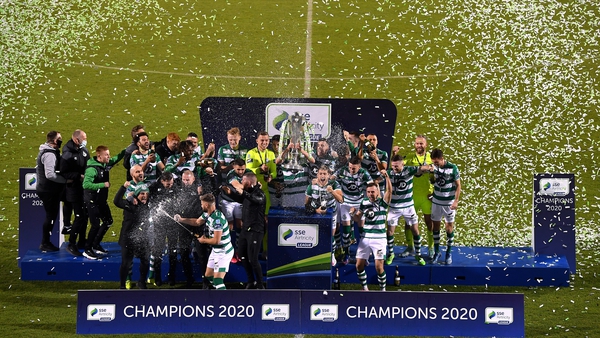 Rovers remain unbeaten and lift the trophy at Tallaght