Pep Guardiola has urged his Manchester City side not to miss the chance to take firm control of their Champions League group with a home victory over Olympiacos.

City are bidding for a third successive win in Group C as the Greek champions visit the Etihad Stadium on Tuesday evening.

Guardiola's side already have a three-point advantage at the top of the section after opening the competition with wins over Porto and Marseille.

Maintaining their 100% record would put City firmly on course for a place in the last 16 for an eighth successive year.

City manager Guardiola said: "It's a tricky competition, that's why I'm delighted with what we have done so far in the Champions League.

"That's why we cannot miss this chance to get nine points and be in a position where we are just one step away from being in the 16 best teams in Europe. This is the target."

Such is Guardiola's determination to get a result against Olympiacos that he insists he will not allow Sunday's looming Premier League encounter against champions Liverpool to influence his planning.

"Absolutely not," he said. "It's the Champions League and you cannot make a false step because after that we would struggle.

"We know that in the Champions League to qualify you have to secure your games at home and win at least one away. We did it in Marseille but now we have to be sure that we can keep the points at home, so that is why we have an incredible opportunity to make a huge step." 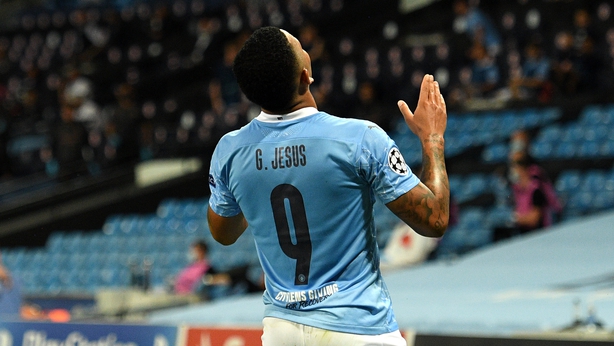 Striker Gabriel Jesus is hoping to prove his fitness after returning to training following a thigh injury. The Brazil striker has not featured since the opening game of the season and, with Sergio Aguero also sidelined, City have been operating with winger Ferran Torres as a makeshift centre forward.

"It's too early to know," said Guardiola at his pre-match press conference. "We'll see but he's happy he's back.
"We are awaiting Sergio but we've been happy with Ferran, so we have an alternative."

Aguero is also making progress in his recovery from a hamstring strain. He could have an outside chance of facing Liverpool but is more likely to return later in the month.

Guardiola said: "He's getting better. I don't know about Liverpool but after the international break, for sure, he'll be ready."

Watch Atalanta v Liverpool live on RTÉ2 and RTÉ Player from 7.30pm, with live updates on all of Tuesday's Champions League action on rte.ie/sport.