Dean George scored a brilliant hat-trick as Athlone Town stunned Premier Division Shelbourne at Lissywollen to book their place in the semi-finals of the Extra.ie FAI Cup.

Adrian Carberry's side, who finished second bottom of the First Division, will now host either Bohemians or Dundalk in the midland club’s first appearance in the semi-finals of the Blue Riband since 1998.

Winning the toss, Shelbourne elected to play with the strong breeze at their backs in the first half, forcing an early corner.

But the high bounce on the astro pitch, coupled to no little persistence from Town striker George, brought the First Division side a shock lead on three minutes.

Shels defender Dan Byrne misjudged the bounce of Jack Reynolds’ ball forward to allow George in behind to force a save from Jack Brady.

Athlone recycled the ball well with Taner Dogan feeding it wide right for Adam Lennon whose cross was drilled low to the net by George.

Pressing well from an Athlone throw-in, the ball ran kindly for Ciaran Kilduff and the striker drove a low shot to the far corner of the Aaron Myles’ net from the edge of the area.

Myles then readjusted well to push a wind-assisted, deflected Ryan Brennan shot out for Shels’ third corner of the game.

The visitors maintained the pressure on the home goal, Denzil Fernandes disappointed not to have found the target with a header from opposite winger Dayle Rooney’s cross.

But poor defending once more cost Shelbourne as they conceded a second goal on 20 minutes from Athlone’s first corner of the game.

Left-back David Brookes’ whipped his delivery deep to the far post. Shels didn’t deal with it, allowing home skipper Scott Delaney to sweep the loose ball to the roof of the net from close range.

And it could well have been 3-1 on 32 minutes as Shels once again struggled to defend a terrific delivery from another Brookes corner.

Ciaran Grogan's header hit the post before Brady scooped it clear with Athlone claims that the ball had crossed the line not being entertained by the match officials.

Myles added to his save in the first half with a superb reaction stop to deprive Shelbourne a second equaliser 10 minutes after the interval.

Rooney’s left flank cross picked out Kilduff in the area, but Myles spread himself well to make a terrific save.

But the frame of the goal would once again rescue Shelbourne on the hour, Brookes’ superbly struck free kick coming out off Brady’s right-hand post.

Athlone then punished a shocking mistake to clinically extend their lead on 66 minutes.

Under no pressure at all, shels right-back Aidan Friel passed straight to George who still had a bit to do, taking the ball between two defenders to rifle a left-foot shot to the bottom corner of Brady’s net. 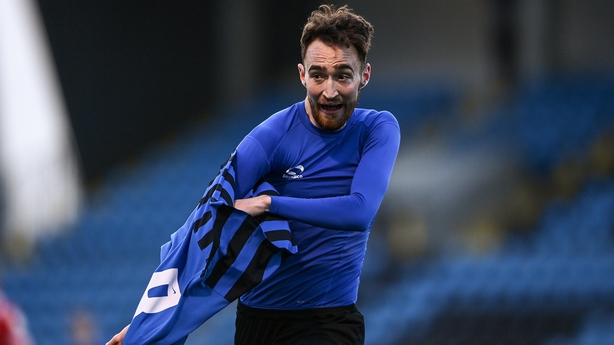 The hat-trick arrived on 78 minutes and was the pick of the 22-year-old striker's goals.

Ronan Manning threaded a perfect pass through the middle for George to run onto and blast his shot to the net from the edge of the area.