Kyle Walker marked his 100th Premier League appearance for Manchester City with the only goal of the game against his former club Sheffield United at Bramall Lane.

Pep Guardiola's team deservedly took the lead in the 28th minute and it was Sheffield-born former Blade Walker who scored.

City had seen a host of chances pass them by, with Aaron Ramsdale making a fine save from point-blank range to deny Ferran Torres shortly before, but Walker's shot from 25 yards out skidded off the rain-sodden surface and into the bottom corner of the net.

It was Walker's first goal in almost a year, since finding the net in a 2-1 win against Southampton on 2 November, but it brought a respectful muted celebration from the 30-year-old.

Guardiola's side were well worth their win with an utterly dominant display, while there will be easier examinations for Chris Wilder's men, who are still without a win in the Premier League this season and have just one point after seven games. 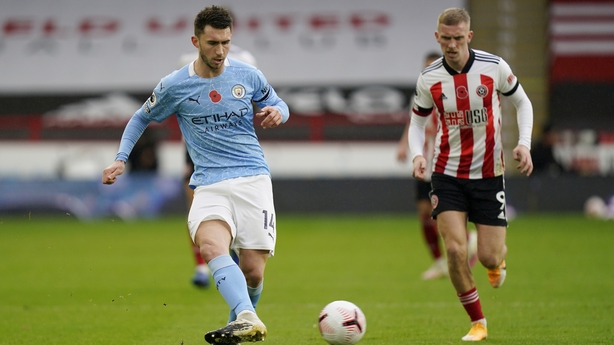 As expected, City dominated the ball early on. Ramsdale was in for a busy afternoon and the Blades goalkeeper was called into action for the first time after eight minutes, palming away Torres' header with a strong hand.

Slow possession with an injection of pace around the penalty area was the order of the day for City and one such example almost brought the opening goal after 12 minutes.

A neat one-two between Kevin De Bruyne and Raheem Sterling carved open the hosts but John Egan was on hand to make a saving tackle. From the resulting corner Aymeric Laporte, arriving at pace at the near post, turned the ball wide with some force.

City continued to probe but this time Rodri took a more direct approach with a swerving effort from 25 yards that Ramsdale had to palm out for a corner.

Midway through the second half City created their first big chance of the game. A neat give-and-go with Joao Cancelo saw Sterling in down the left side of the penalty area and he crossed the ball through Egan's legs to pick out the incoming Torres at the near post.

However, Ramsdale was in the right place at the right time to block the Spaniard's toe poke and smother the danger.

City deservedly took the lead after 28 minutes through Walker's low drive, before Ramsdale did well to hold on to a low shot from a De Bruyne free-kick soon afterwards. 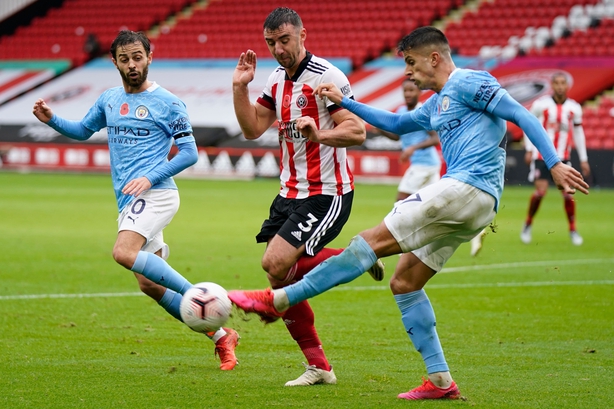 The Blades came into the game more towards the end of the first half and Rhian Brewster glanced a header wide as Sander Berge's cross was just too high for him.

However, City assumed control again after the break, creating a host of chances early in the second half.

A mistake from Ramsdale, rushing out of his area, allowed Torres a free shot at an open goal but he put his effort straight into the hands of the Blades goalkeeper.

De Bruyne's low strike through a crowded penalty area flew narrowly wide before a superb one-handed save from Ramsdale down to his right to turn away a Riyad Mahrez free-kick.

Midway through the second half the hosts had their best chance of the match. Berge did brilliantly down the right, skipping past Cancelo and driving into the penalty area before cutting the ball back for John Lundstram, whose shot went just over the crossbar.

City seemingly tried to see out the game thereafter, content to just stroke the ball around and keep possession, rather than go in search of a second goal to kill the match.

Sterling and Mahrez were both guilty of wasting chances when in good positions inside the penalty area, opting to cut back or pass rather than shoot.

Bernardo Silva drilled an effort into Ramsdale's midriff after cutting in from the right flank after 83 minutes in what was the last meaningful action of the match.