There's an FAI Cup quarter-final and two First Division play-offs down for decision as this shortened League of Ireland season heads for an intriguing climax.

Athlone wrapped up their First Division campaign on Tuesday with a 1-0 defeat to Bray Wanderers that left them second from bottom, but Adrian Carberry's side did show signs of progress in the shortened season.

This is their first appearance in the last eight since 2006, when they were beaten 2-1 by Shamrock Rovers.

Shels came up from the First Division last ear but they face a nervy climax to the league season as their survival scrap goes right to the wire. A resurgent Finn Harps could yet condign Ian Morris's men to the promotion/relegation play-off.

This is a welcome distraction from the grind.

Athlone Town: Lee Duffy is suspended. Bar that, Carberry has no major worries.

Adrian Carberry (Athlone Town boss): "These are the games you want to play in, these are the games were you go to bed at night saying 'what if' and 'if only I apply myself right here there's a chance I will get a chance to impress on a big stage and possibly get a move'," he told Extra.ie. "Our players have to be looking towards that, to always be getting better and improve their game."

Ian Morris (Shels boss): "I want to get to the Aviva and bring this team to a final. It's hugely important and we want to be in the mix there. The players have been fantastic for me, it’s a brilliant group. The higher you go in football, the higher the levels get, and the players are responding to that." 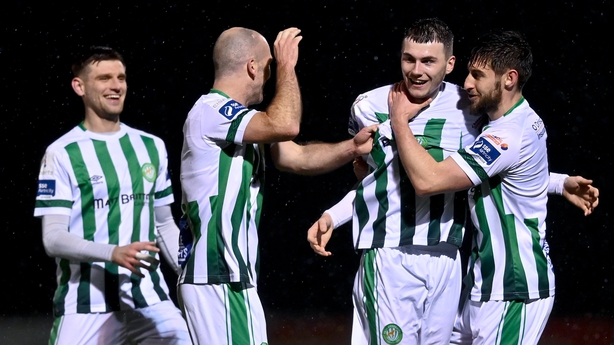 What a week it's been for Galway United.

It looked like their season was over on Tuesday night after they drew 2-2 with UCD to finish outside the play-off places. However Wexford's successful appeal against a ruling they had fielded an ineligible player in four games changed the complexion of the table dramatically.

Cabinteely had benefited from the initial ruling that saw four sides being handed 3-0 victories, but once it was overturned, Cabo slipped down to seventh, with Galway squeezing into the top five to enter this play-off semi-final.

They travel back up to the Carlisle Grounds for the second time in a week to face Gary Cronin's side, who were just pipped to the First Division title on the final day of the season by Drogheda United.

Galway United: Josh Smith, Conor Melody and Micheál Schlingermann are all out, while there are doubts over the fitness of Jack Lynch, Carlton Ubaezuonu and Enda Curran. The trio will undergo late fitness tests.

John Caulfield (Galway United): "We've got a second chance now ourselves through the play-offs and we're looking forward to the game.  It was a phenomenal effort from the players to get to the play-off. We got 21 points out of 10 games, which is an incredible return. It's a cup final for us and Bray to see who can progress. It will be a very tight game.

UCD finished a point ahead of Longford in the regular campaign and thus earn home advantage for this showdown.

The Students drew 2-2 against Galway earlier this week to guarantee their spot in the play-offs, while Longford slipped to a bad defeat to Wexford in their final game of the regular season.

UCD: Jack Keaney is back from suspension.

Longford Town: Aodh Dervin and Mick McDonnell are back from suspensions. Shane Elworthy is a doubt, as is Dean Byrne, who is nursing a sore ankle.

Daire Doyle (Longford boss): "We finished fourth; you always finish where you deserve to finish," he told The Longford Leader. "We know what's needed. In play-off games anything can happen and you need to be ready. We have a chance and we got to grab it with both hands and make the most of it."