Celtic let slip a two-goal interval lead to draw with Lille in their thrilling Europa League encounter at the Stade Pierre Mauroy.

Neil Lennon's side were under the spotlight after losing to Rangers and AC Milan in their first Group H fixture before drawing 3-3 with Aberdeen at Pittodrie on Sunday, but they raced into a two-goal lead through attacker Mohamed Elyounossi, who scored twice in a four-minute spell in the first half.

Hoops keeper Scott Bain, preferred to Vasilis Barkas, saved a Jonathan David penalty five minutes before the break and it looked like it was going to be Celtic’s night, but Lille dominated in the second half.

Defender Zeki Celik pulled a goal back in 67th minutes and Jonathan Ikone levelled in the 75th minute, with Celtic hanging on for a valuable point although they will feel it should have been more.

Lennon made one change with captain Scott Brown taking over from Tom Rogic, who dropped to the bench, joined by Odsonne Edouard and Nir Bitton, who had recovered after missing three matches following positive tests for Covid-19.

Bain retained his place in goal with Greece keeper Barkas among the substitutes after recovering from a back injury.

Lille coach Christophe Galtier reshuffled his side and had Turkey striker Burak Yilmaz and Portugal midfielder Renato Sanches among those on the bench.

Turkey attacker Yusuf Yazici, who scored a hat-trick in the 4-1 win over Sparta Prague in the opening group game, led the line with Canada striker David.

There was little indication of the drama to follow as Lille dominated possession in the early stages, with Bain making his first real save in the 13th minute following a corner when he beat away a drive from Boubakary Soumare, before saving Yazici’s left-footed free-kick from 25 yards two minutes later.

In the 19th minute Albian Ajeti had the ball in the Lille net but was well offside then blazed an Elyounoussi cut back over the bar from eight yards. 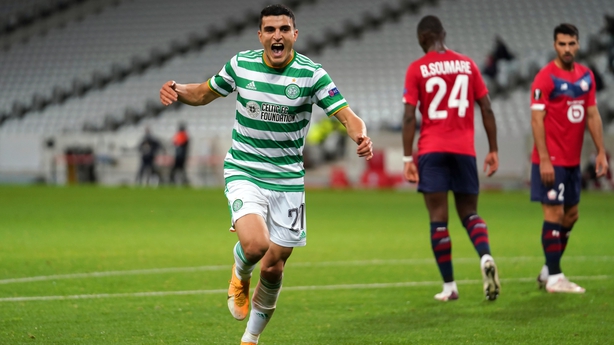 The Parkhead side’s first goal on 28 minutes came after Lille full-back Zeki Celik lost possession, and when Ajeti flicked the ball to Elyounoussi, he sped towards goal and bent his shot past the helpless keeper Mike Maignan.

Lille struggled to cope with the setback.

Four minutes later Ajeti and Jeremie Frimpong combined and when the Hoops wing-back crossed into the box Elyounoussi swept the ball into the corner from 16 yards.

Lille had the chance to reduce the deficit when referee Aleksandar Stavrev pointed to the spot after a challenge by defender Shane Duffy on David, but the unconvincing spot-kick was blocked by Bain.

The second half was a slog for Lennon’s side.

Bitton replaced the injured Kristoffer Ajer in the 51st minute and the home side called for Yilmaz and Renato Sanches, with Edouard on for Ajeti.

Without Ajer, Celtic wobbled and conceded when Yazici’s corner from the left was flicked on by Adama Soumaoro, with the unmarked Celik prodding the ball in at the back post.

Celtic looked weary and when Celik turned the ball back across the penalty area, Ikone pounced on the loose ball with his deflected shot ending up behind Bain, but Lille could not complete the comeback with a winner.

Indeed, Celtic might have snatched it near then end when Frimpong slashed a drive just over the bar.