Bale has been building up his fitness following a knee injury which put the brakes on his second spell at the club, following his loan return from Real Madrid.

The Wales international played 60 minutes against LASK last week and looked rusty before being an unused substitute in the 1-0 win at Burnley on Monday.

Mourinho is ready to unleash him against the Belgians and expects him to "fly".

"Bale is playing and we all have not just the feeling, but also the data that Bale is arriving," he said.

"He is working very hard. He is being quite a great example for everybody. A big guy like him, travelled to Burnley, stayed on the bench for 90 minutes, didn’t play one minute.

"I can see just with my eyes but then the scientific data is also coming and he is working very, very well.

"He is improving, he is improving a lot and I think we can see already Gareth at a good level and hopefully he can fly because he is working very hard. So he’s playing."

Bale returned to Spurs after a seven-year stint of two halves at Real Madrid, with the second half, where he fell out of favour under Zinedine Zidane, earning him a reputation for being disliked.

Mourinho has not seen anything of that back in north London, though.

He said: "I can only speak about him with us. And him with us - amazing. Of course, he arrived injured. Of course, when you are injured for such a long time, it takes a little bit of time. We are giving him that time.

"He is working very hard. I think he is very pleased with the level of organisation we have in the club. Probably, he is not used to it.

"But again I repeat what I told before, he is in a better place than he was a couple of weeks ago. He is arriving." 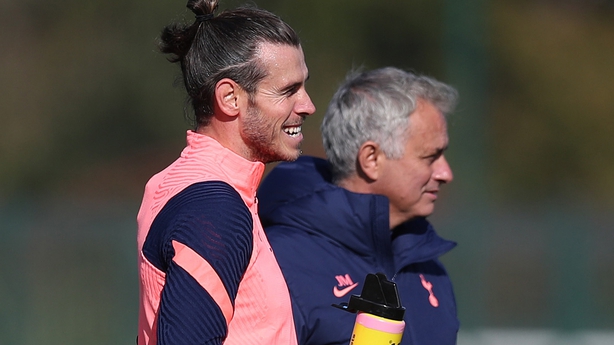 Spurs are in Belgium for the second of their Group J games, but with rising coronavirus infections across Europe – with France and Germany set to go into lockdown – there are concerns European competitions could be affected.

Mourinho would prefer to keep the show running, however.

He said: "I prefer myself, if that is the case, to take a few risks, but I have to say very controlled risks.

"But play football and do my job and give people what they love, which is football, and if people can’t come to the stadium they have us at home and I just want to think positively about it.

"We try to be safe as we can in the club. In the clubs the situation is much more controlled. Nobody is free from problem. But the bubble exists and we try as much to be protected.

"I believe that national teams are the space where even with great organisation lots of travelling and players travelling separately is more dangerous.

"But at a club level what we did for example today leaving the training ground all together after being controlled twice, arriving here, going direct to the hotel, staying in the hotel and not leaving, coming here tomorrow.

"The area in the dressing room is beautiful, clean, new, safe. Honestly I feel safe. Maybe something wrong happens with myself.

"We finish the game and go home and in our case we don’t go home, we go to the training ground and we stay there to prepare for the game on Sunday. We try to do our lives. The world cannot stop. Football is an important area so I am more than ready to keep doing what we are doing."

Mourinho confirmed that Eric Dier and Tanguy Ndombele have not travelled with the squad as they are rested ahead of Sunday’s match against Brighton.

Mourinho will make several changes, with the likes of Davinson Sanchez, Steven Bergwijn, Harry Winks and Carlos Vinicius likely to join Bale in the starting XI.