Diogo Jota and substitute Mohamed Salah netted second-half goals as Liverpool beat Midtjylland at Anfield, with Fabinho having to go off in the first half to add to their defensive injury problems.

Fabinho – playing at the back again in the absence of Virgil van Dijk and Joel Matip – had to be substituted around the half-hour mark having pulled up while running.

That was amid an underwhelming display from the Reds in the first half, during which they failed to register a shot on target.

Jota then put Liverpool ahead in the 55th minute with a close-range finish and, shortly after the visitors had gone close to scoring a late equaliser through Anders Dreyer, substitute Salah added a penalty in stoppage time.

It took 55 minutes for Liverpool to register a shot on target but when they did, it resulted in this goal for Jota as the Reds take the lead against Midtjylland #LIVFCM #LFC #rtesoccer

It made it two wins from two games in Champions League Group D for Jurgen Klopp's men, but there will be concern over the condition of Fabinho.

Klopp opted to drop Salah, Sadio Mane and Roberto Firmino to the bench for the match, along with Georginio Wijnaldum, as Divock Origi, Takumi Minamino, Xherdan Shaqiri and James Milner started.

There was an early scare for the hosts as former Brighton man Dreyer latched on to a long pass forward, with his shot being saved by Alisson Becker, and the Brazilian goalkeeper then comfortably gathered a low free-kick from Pione Sisto. 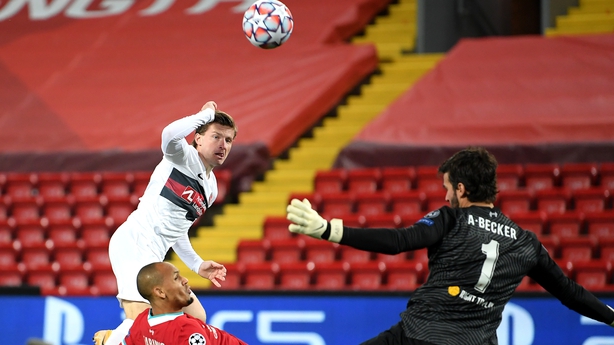 Liverpool struggled as they looked to get some attacking rhythm going.

Trent Alexander-Arnold sent a cross towards Minamino, who was unable to connect, and the full-back saw his attempted pass to the Japan international intercepted after a good run into the box.

Minamino subsequently failed to get a shot away having been fed by Jordan Henderson, before Liverpool were hit by another defensive injury blow as Fabinho required treatment and had to be substituted, with 19-year-old Rhys Williams coming on in his place.

Jota and Milner had efforts blocked and Minamino headed wide in stoppage time as Liverpool got to half-time without having called Midtjylland goalkeeper Mikkel Andersen into action.

When Liverpool finally got a shot on target, 10 minutes into the second half, it gave them the lead.

Alexander-Arnold gave the ball to Shaqiri, received his delightful return pass and squared to Jota, who tapped in.

Five minutes later Klopp brought on Salah and Mane for Minamno and Origi, but it was Midtjylland who threatened next as their substitute Evander fired narrowly wide.

Salah shot off-target and Firmino, having also been brought on, also struck into the stand as the end of the contest drew near.

Dreyer then almost brought things level as he sent a dinked effort into the side-netting, before Salah sealed the three points for Liverpool, converting from the spot after referee Paweł Raczkowski judged he had been fouled by Paulinho.

Mo Salah made sure Liverpool are two from two in the Champions League with this late penalty to make it 2-0 against Midtjylland #LIVFCM #LFC #UCL #RTESoccer pic.twitter.com/k1kJwI2J8W