Manchester City took control of their Champions League group as they eased to victory over Marseille at the Stade Velodrome.

Ferran Torres struck in the first half before further goals from Ilkay Gundogan and Raheem Sterling after the break wrapped up a convincing victory.

The result gives City a three-point lead in Group C after just two games and the intensity of the performance should boost confidence levels after an underwhelming start in the Premier League.

On two occasions in Europe now this term, following last week's victory over Porto, City have been hugely positive in their play.

This time they made light of their lack of a recognised centre forward, as well as a host of other injuries, as they took the game to their French hosts from the outset.

Torres was a surprise choice to play centrally in the absence of injured strikers Sergio Aguero and Gabriel Jesus, but it was a selection that paid off.

Marseille boss Andre Villas-Boas, perhaps drawing encouragement from Lyon's defeat of City in last season’s quarter-finals, set out with a plan to sit deep with a five-man defence.

But unlike on that night in Lisbon in August, City were sharp and keen to get on the front foot.

The visitors won a series of corners in the opening minutes and the fit-again Kevin de Bruyne volleyed over and had another effort blocked. Phil Foden also tested goalkeeper Steve Mandanda before City took a deserved lead on 18 minutes. 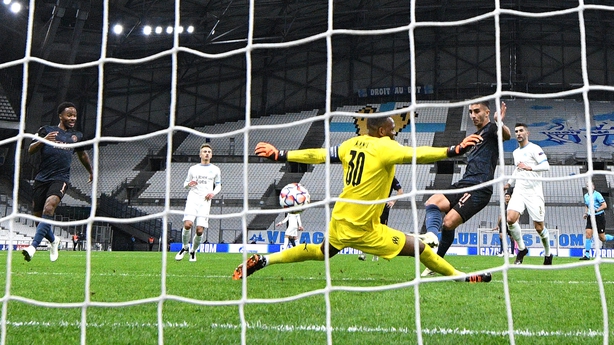 De Bruyne found himself in clear space behind the Marseille defence after a mistake by Valentin Rongier and calmly squared for a similarly unmarked Torres to tap home (above).

City continued to dominate and went close to a second when a well-struck shot across goal from Oleksandr Zinchenko shaved the outside of the post.

Marseille offered little until a long-range effort from Nemanja Radonjic four minutes before the break but it was comfortably claimed by Ederson.

The only disappointment for City at the break was that they had not converted their possession into more goals.

That may have given Marseille encouragement and they threatened early in the second half as former Newcastle striker Florian Thauvin was denied by a combination of Ederson and post.

But that only opened up the game more and it played into City’s hands as Sterling came into his own on the right. The England forward first raced in on goal only to be denied by a fine Jordan Amavi tackle and then teed up Gundogan to shoot at Mandanda.

That combination then came good to double City’s lead with 14 minutes remaining as Sterling headed down a Foden cross and Gundogan finished from close range.

City were not finished there and they claimed a third moments later as Riyad Mahrez released De Bruyne and his inch-perfect ball was turned in by Sterling.