West Brom came from behind to claim a point in a hard-fought Premier League draw at Brighton.

An unfortunate own goal from West Brom's Jake Livermore gave the home side a first-half lead but the Seagulls were unable to hold out for the win.

The visitors came out strongly in the second half, and were eventually rewarded for their pressure in the 83rd minute when Callum Robinson set up  Karlan Grant to fire home his first goal for his new club.

Seagulls boss Graham Potter had stressed before the the game the need for improvement on the attacking front, but his side again lacked a clinical edge in front of goal.

They had a number of chances to take the lead, but goalkeeper Sam Johnstone was a match for all of them, until Branislav Ivanovic's attempted clearance struck Livermore and rebounded into the goal.

West Brom's wait for a first win of the season continued, and they struggled to create chances on the south coast.

Brighton goalkeeper Mat Ryan was forced into an early save from Filip Krovinovic, but the Australian was up to the effort.

The home side had the ball in the back of the net in the 15th minute, after Adam Lallana's lofted cross was volleyed in by Neal Maupay, but the assistant referee had raised the offside flag.

The Seagulls had a great chance to take the lead in the 24th minute, only to be denied by Johnstone on his 100th appearance for West Brom.

Brighton had broken quickly through Leandro Trossard, who played Lallana in behind the Baggies defence before the former Liverpool man squared the ball to Maupay instead of shooting himself, but the Frenchman's effort was saved by the goalkeeper's outstretched leg. 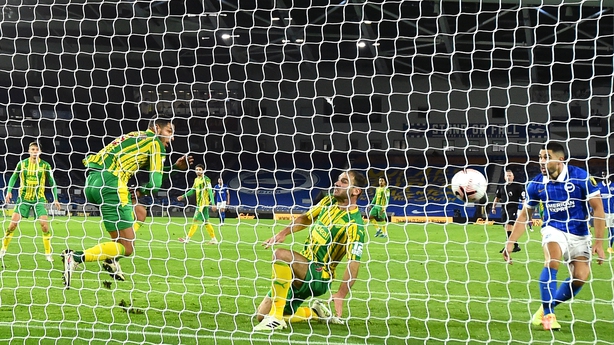 The Seagulls' pressure came to a head in the 40th minute, when an attempted clearance from Ivanovic rebounded off Livermore and into the back of the net to give the home side the lead.

Brighton played well to create the opportunity, with Lallana's shot blocked before Tariq Lamptey picked up the ball and squared it across the face of goal where Ivanovic cleared the ball into Livermore's head and into the back of the net.

West Brom looked to get on the front foot at the start of the second half, and Conor Gallagher had an effort blocked by the home defence just after the restart.

The Baggies continued to put pressure on the home defence as the second half went on, forcing Ryan into another save from Krovinovic.

Matheus Pereira had a good chance for the visitors in the 65th minute, coming onto a ball from Conor Townsend, but he put his effort wide of the target, just before Ryan had to parry a strike from the subsequent corner.

Pereira also came close in the 76th minute, the Brazilian driving the ball goalwards from outside the box and his effort just clipping the outside of the post.

West Brom's second-half pressure finally paid off when Grant turned a Callum Robinson ball past Ryan in the 83rd minute to ensure that the Baggies would leave the south coast with a point.