By James Rogers at The RSC

Waterford FC blew the race for Europe wide open with victory over a below-par Dundalk at the RSC this afternoon.

While they remain fourth, they are now just a point behind Filippo Giovagnoli’s side in third with St Patrick’s Athletic, who host Dundalk next Sunday, also not out of the equation as they have two games on hand on the Lilywhites.

It will become a read headache for the Lilywhites as next Sunday’s meeting with the Saints in sandwiched in between two Europa League games.

The visitors made six changes from the side which lost 2-1 to Molde in the Europa League on Thursday but there was nevertheless a European hangover as they failed to ever really build on a decent start.

Indeed, Fran Rockett’s side were full value for the win given they had the best opportunities throughout.

They will now be without a match until 8 November when they face Finn Harps away.

For Dundalk, this was a hugely disappointing result ahead of Thursday’s trip to the Emirates Stadium to face Arsenal.

They struggled to move through the gears at any stage and there are fears that their hectic schedule of late has already caught up with them with a lot more football still to be played over the next few weeks.

It was a first half of few clear cut chances but perhaps the best for the visitors came on 14 minutes when Michael Duffy cut in from the right before having a curling shot pushed away by Brian Murphy following an exchange with Jordan Flores.

Duffy then returned the favour for the Englishman four minutes later when he broke on the left before pulling back to Flores but he was denied by a block at close range by Jake Davidson. 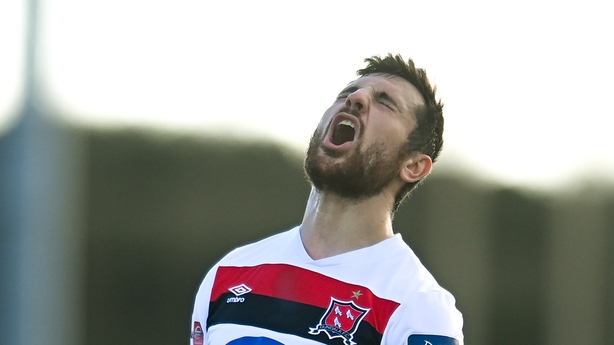 Duffy continued to pose the biggest threat for Dundalk and he almost punished Waterford again on 32 minutes. After Niall O’Keeffe’s shot from range was blocked, the Louth men broke at pace with Duffy only being denied by a last gasp block from Darragh Power before Davidson dispossessed Stefan Colovic in his attempt to follow up.

The home side’s best chance came five minutes before the break and they really should have been ahead. Martin caught Chris Shields in possession with the loose ball picked up on by Daryl Murphy who rounded Brian Gartland only to pull his effort agonisingly to the right hand side of the post.

The former Irish international would threaten again on the stroke of half-time when he turned to get a shot away on the edge of the box but on this occasion it was straight at Aaron McCarey.

Flores would fire over after that for Dundalk before Sean Murray, the club’s goalscoring hero against Molde on Thursday, headed wide from a Colovic corner in stoppage time.

There would be another chance for the visitors within three minutes of the restart when David McMillan rose to meet John Mountney’s cross but he could only head straight at Murphy before blazing another effort well over moments later.

The home side would take the lead then somewhat against the run of play on 57 minutes. Alistar Coote’s free kick was only partially headed clear by Gartland with Will FitzGerald’s follow up cross met by the head of Martin, who nestled a header past McCarey to the bottom left hand corner.

Daryl Murphy then had two good chances to put the result beyond doubt. He almost caught McCarey off his line with an audacious effort from inside his own half on 59 minutes that drifted just to the right and wide.

He was then denied by a superb save from McCarey after being put through one on one by a huge punt forward from his namesake, Brian, on 75 minutes and arguably should have punished the Dundalk defence for napping.

The visitors did go close to equalising five minutes from the end but substitute Patrick Hoban’s left foot shot from the left of the box flashes agonisingly just wide of the right hand post.

Hoban would have another effort a minute from the end when he met Duffy’s corner at the near post but his diving header was well over.