Coman, whose goal won last season's final, put Bayern in front with 28 minutes gone and then set up Leon Goretzka to double their advantage by the break.

Corentin Tolisso’s rocket put Bayern out of sight with 24 minutes remaining before Coman helped himself to his second.

The win left the Bundesliga side top of Group A by two points after substitute Vitali Lisakovich ensured Lokomotiv Moscow returned from RB Salzburg with a point after a hard-fought 2-2 draw.

Eder headed Lokomotiv into a 19th-minute lead at the Red Bull Arena, but Dominik Szoboszlai levelled on the stroke of half-time to steady the ship.

Zlatko Junuzovic fired the home side in front within five minutes of the restart, but Lisakovich’s header meant the Russians went home with some reward for their efforts.

Tete was Shakhtar Donetsk’s hero as they survived a second-half Real Madrid fightback to clinch a famous 3-2 Group B victory in Spain.

A Shakhtar side missing 10 regulars due to coronavirus and injuries scored three times inside 13 first-half minutes, with the Brazilian contributing the first and playing key roles in the other two as Raphael Varane stabbed into his own net and Manor Solomon made it 3-0 three minutes before the break.

Luka Modric pulled one back for the Spanish champions, who started with Karim Benzema and Toni Kroos on the bench and Sergio Ramos not even in the 18, with a stunning 54th-minute strike from distance and substitute Vinicius Junior mugged Marlos to make it 3-2 within seconds of his introduction, but a stoppage-time equaliser by Federico Valverde was correctly ruled out for offside.

Inter Milan needed a last-gasp Romelu Lukaku equaliser to claim a 2-2 draw in an eventful encounter with Borussia Monchengladbach.

The Belgium international had put the home side ahead with 49 minutes gone, but Ramy Bensebaini’s penalty and a second from Jonas Hoffman looked to have won it for the Bundesliga outfit until Lukaku repeated the dose at the death. 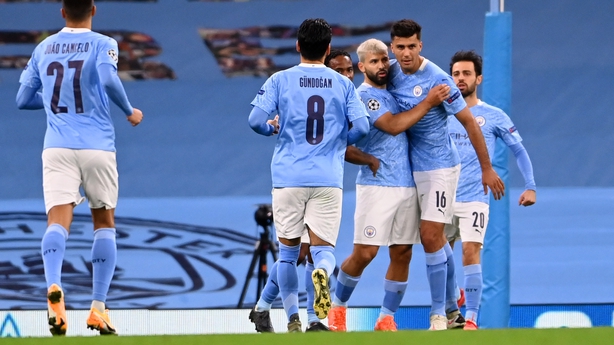 In Group C, Ilkay Gundogan scored a stunning free-kick as Manchester City came from behind to beat Porto 3-1 at the Etihad Stadium.

Luis Diaz gave the visitors a 14th-minute lead after pouncing on an error by Ruben Dias, but Sergio Aguero’s penalty restored parity within six minutes.

Gundogan made it 2-1 with an imperious 65th-minute strike before substitute Ferran Torres cemented victory 17 minutes from time.

Ahmed Hassan came off the bench to fire Olympicos to a stoppage-time victory over Marseille.

The on-loan Braga striker won it in the first minute of added time when he headed home the only goal from Mathieu Valbuena’s cross.

Nicolas Tagliafico’s own goal proved decisive as Liverpool began life without Virgil Van Dijk with a battling 1-0 win over Ajax in Amsterdam.

The Reds went in front in bizarre fashion with 10 minutes of the first half remaining when Sadio Mane turned brilliantly to surge into the penalty area before scuffing his shot across the face of goal, where defender Tagliafico contrived to hack it into his own net.

But only an acrobatic goal-line clearance by makeshift defender Fabinho denied Dusan Tadic a 44th-minute equaliser and former Everton midfielder Davy Klaassen rattled the post two minutes after the restart.

However, it is last season’s surprise package Atalanta who top Group D after making light work of Danish outfit Midtjylland as they raced into a 3-0 lead by half-time with goals from Duvan Zapata, Papu Gomez and Luis Muriel before substitute Aleksei Miranchuk added a fourth a minute from time.