Tottenham boss Jose Mourinho did not think the introduction of Gareth Bale was the catalyst for his side's late capitulation against West Ham.

Spurs were coasting to the three points as they led 3-0 after a scintillating opening 16 minutes where Son Heung-min's goal after 45 seconds was added to by Harry Kane's brace.

Bale made his long-awaited return to the Spurs side after seven years away as a second-half substitute when it was still 3-0 but it all went wrong for him as the Hammers scored three goals in the final eight minutes to snatch a 3-3 draw.

There has been plenty of hype surrounding Bale's return, which was almost marked with a dream goal that would have made it 4-2, but Mourinho did not think Bale's arrival affected the game in a negative manner.

"The decision not to start him was I think a good decision. A decision to show that he doesn't have a beautiful chair waiting for him in the team and he sits there the first time he can.

"It was a message to the team that in this team everybody has to fight for positions.

"He's very well accepted in the group. Everyone likes him, and I believe he also likes what he found here. So everything is positive and the focus was not on him.

"It's a pity that he couldn't score that fourth goal which was a beauty and would have killed the game. But that's football." 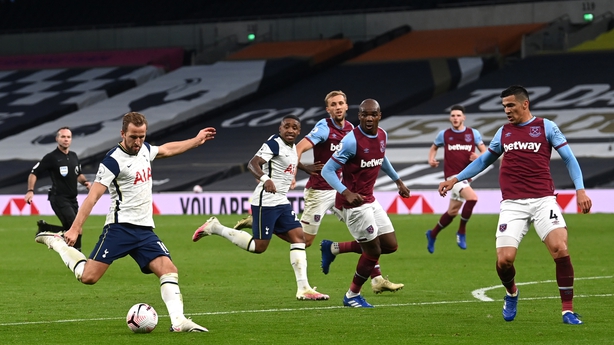 It seemed impossible Spurs would not win the game after their devastating start put the Hammers on the rack.

Son continued his hot streak with an opener after 45 seconds, before Kane scored twice in eight minutes as Spurs' goal glut carried on.

"Unfortunately it's football for us in a negative way and in positive way for them but that's football.

"I prefer to say that they had incredible belief and probably they scored that first goal when they didn't have that belief.

"We were not then good enough or strong enough to cope with the last 10 minutes."

The emotions in the opposing dugout when Lanzini found the top corner from 20 yards in the fourth minute of stoppage time could not have been more contrasting.

Boss David Moyes was impressed with his team who continued their promising start to the season.

"It was tough, the opening 10 or 15 minutes you thought they were on fire and it was like, 'Here we go', but after that we got a grip and controlled the game. I thought the players did really well throughout the game.

"It is one of these moments you don't get very often, we scored the last three goals in the last 10 minutes.

"I saw my celebrations back and all the players are laughing at me jumping up and down, it felt like a David Pleat moment.

"This is what football is for. When you get something from nowhere it gives you emotions and I think that's why we are in it.

"We never gave up, the players kept at it, it was a really proud performance."