Peamount United kick-started the second phase of the 2020 Women's National League season by collecting another victory, while Shelbourne had a big win in Wexford.

Athlone Town and Shelbourne also celebrated wins, while Bohemians held DLR Waves to a scoreless draw in their first game in Dalymount Park.

After finishing the first phase with a victory, Bohemians started the second half of the season by playing at Dalymount Park for the first time and by collecting a point.

There were few clear-cut chances for either side in this fiery encounter but both will see it as a point gained considering the effort that they exerted over the course of 90 minutes.

Sinead O'Farrelly had DLR hearts thumping with a late free-kick but Bohs were unable to get in behind their opponents to break the deadlock.

The visitors will be pleased by the energy shown by Carla McManus, who could proved to be an attacking threat for them, while Mel Clarke made her debut in the second half. 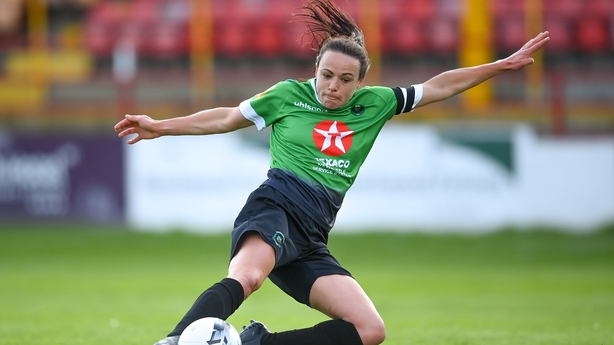 Ahead of linking up with the Republic of Ireland this weekend, Aine O'Gorman (above) knew that she had to maintain her good recent form and that is exactly what she did here.

The Peamount captain fired in the first goal of the game after 24 minutes to move ahead of team-mate Eleanor Ryan-Doyle in the Golden Boot race for the Top Goalscorer.

It was far from smooth sailing for the champions however as Galway applied a lot of pressure and probably deserved more from the game as they kept goalkeeper Niamh Reid-Burke busy.

Peamount were able to keep their hosts at bay until Lucy McCartan scored in the final 10 minutes to make sure of the win.

With the League structure now split into two groups, teams know exactly what they are fighting for in the second part of the season and Athlone showed that they are determined to pick up more points.

Manager Tommy Hewitt placed his trust in young players for their debut season in the league and their gradual improvement has been clear to see, especially in the likes of Kayla Brady and Katelyn Keogh - both of whom scored here.

It was Kellie Brennan who got them started in Jackman Park before Brady extended their lead, but Treaty did hit back through Cayla Davis before the interval.

Keogh, who is emerging as one of the most exciting talents in the league, scored on 59 minutes and that proved to be the winner in spite of Gillian Keenan getting one back.

It was the Jessica Ziu show at Ferrycarrig Park - the Shels attacker started and finished the scoring as she completed a hat-trick.

The Dubliner got her team off the mark after just three minutes and even though Ciara Rossiter responded for the hosts it was clear that The Reds were fired up for this one.

Ziu got another in the first half and Noelle Murray got her first of the game too as Dave Bell's side flexed their attacking muscles and showed just how clinical they can be when playing at speed.

Captain Kylie Murphy pulled one back for Wexford on 64 minutes but further goals from Murray and Ziu wrapped up a big win for Shels, who are desperate to keep pressure on League leaders Peamount.