Gareth Southgate threw his support behind Harry Maguire after the out-of-sorts defender's costly sending off in England’s shock Nations League loss to Denmark.

Three days on from impressively coming back to beat Belgium, Christian Eriksen fired home a controversially-awarded penalty to seal a 1-0 victory in front of empty stands at Wembley.

Frustration boiled over after the final whistle as full debutant Reece James was sent off for dissent, but the fallout from England’s first home defeat since September 2018 is sure to focus on Manchester United’s Maguire.

Having started the campaign poorly after a truncated pre-season overshadowed by a well-documented Greek court case, the world’s most expensive defender received his marching orders after 31 minutes on Wednesday.

Maguire could have no argument with either booking and Southgate has backed him to come through this sticky period, saying "he has been getting all sorts for a while from people who should know better".

Asked to clarify those comments, the England boss said: "No, I don’t think it needs elaborating on.

"He’ll come through it, he’ll be a better player and a stronger man for it. He knows there will be criticism after this, and you have to accept that.

"To go down to 10 men is costly for the team, but we fully back him, we fully support him. He’s been a top player and is a top player for us. He’ll come through it.

"He showed on Sunday why we think so much of him with his performance against Belgium. He’ll get through this period and he’ll be back to his best." 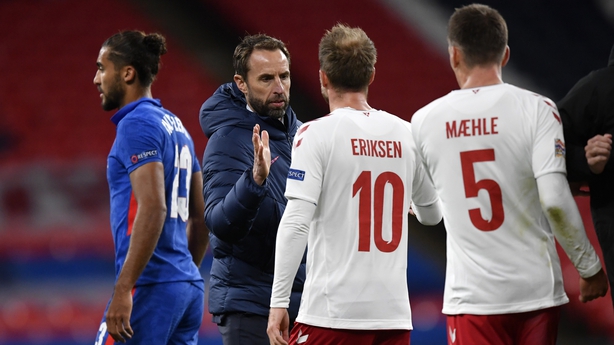 Southgate says he has no intention of taking Maguire out of the firing line when England next meet up in November.

The England boss has plenty to mull over before then and is sure to have a word with James after his sending off.

"The sending off at the end I’m told was for dissent, so that’s obviously something as a young player he has to recognise is not acceptable," Southgate said of the Chelsea youngster.

"I thought his individual performance was outstanding with and without the ball. The opening half an hour, him and his combinations with Mason (Mount), Kyle (Walker) and the midfield players really opened them up.

"The most frustrating thing of the night is we were playing so well, using the ball so well and sustaining attacks well.

"But this is football. Moments change the flow of the game – that’s always the nature.

"You can’t afford to go down to 10 at any level of the game. It’s extremely difficult to improve your result when you’re down to 10.

"They almost carried out the perfect plan with 10 men and created some good opportunities, so I couldn’t be prouder of what they’ve done – not just tonight but across the three months.

"We’ve had an incredible chain of things to deal with for both of the two camps this autumn, but this group have got stronger."