Michael Obafemi has been challenged to prove he can hack it in both international and Premier League football by firing the Republic of Ireland into the European Under-21 Championship finals.

The 20-year-old striker, who made his Ireland debut as a substitute in Denmark almost two years ago, was disappointed not to be included in Stephen Kenny's first senior squad last month and has had to make due with just two brief appearances as a substitute for Southampton so far this season.

However, with Aaron Connolly and Adam Idah with the seniors this time around and Troy Parrott injured, Obafemi has a chance to make a name for himself at Under-21s level on Tuesday as Ireland attempt to ease their way closer to qualification against Italy in Pisa.

Manager Jim Crawford said: "I had a long conversation with Michael and he was great. He said that he was looking forward to coming into camp and he was going to give everything, and he’s been true to his word since the first minute he arrived.

"Michael’s bubbly anyway, that’s his nature, but when it’s come to training sessions, he’s very effective and he’s looking forward to the challenge.

"I know things haven’t been great for him at club level at the minutes – he’s only played just over 25 minutes with his club, Southampton, and okay, it’s the senior squad.

"But what an opportunity and platform for him to go and prove himself to the manager at Southampton and to the senior manager to say, 'Don’t forget me in your plans because I can play at this level’."

Crawford's first game at the helm – he took over from Kenny when he replaced Mick McCarthy in charge of the senior squad – sees the Group 1 leaders go head-to-head with favourites Italy knowing victory would significantly boost their attempts to become the first Irish team to make it to the finals.

However, it will be played out against a backdrop of uncertainty with his squad having been depleted by the elevation of defender Dara O’Shea and midfielder Jason Knight to the senior party and with the Italians fielding their U20s team after a series positive coronavirus tests among the U21s.

Crawford said: "We’ve got players capable of going out and putting on a really good performance. It’s an unbelievable opportunity for the 21s to qualify for the first ever finals, but we’ve a good group here." 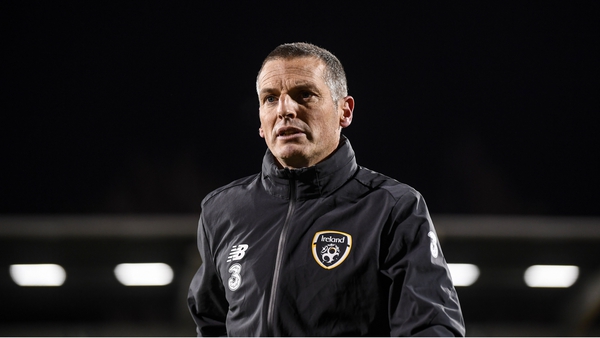 U21 boss Crawford not looking for excuses as Covid bites