Alan Browne admitted that he was gutted to miss a penalty in the Slovakian shootout on Thursday night, yet the Ireland midfielder said that if the opportunity arose again, he would again put his hand up.

The Preston North End man came on as a second-half substitute in Ireland's Euro 2020 play-off in Bratislava and made a real impact in the game, hitting the post in extra time as well as being involved in some of Ireland’s best chances.

Browne will, of course, be remembered by some as one of the two Ireland players to miss their spot-kick in the penalty shootout, however, the Cork native was adamant that he would do it all over again.

"It’s disappointing. I’m as gutted about it as anyone else is," said Browne, speaking to the media on Saturday.

"I accepted the responsibility. It’s a privilege to have that pressure, and unfortunately it didn’t go in and wasn’t meant to be. But I said before, I’d rather miss it than see one of my team-mates miss it.

"I put my hand up, I wanted one and it didn’t go in. That’s unfortunate for me and the rest of the boys but I have no regrets. If the opportunity arose again, I’d put my hand up again." 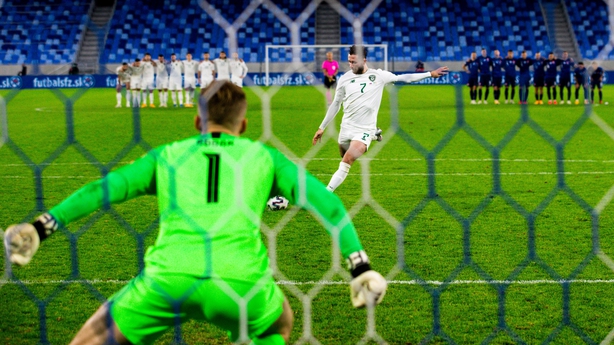 Browne said that he always analyses his own performances, and it was no different following the match in Slovakia, where the player felt that he contributed to a lot of Ireland's positive play.

And the midfielder said that he won’t dwell on the missed penalty despite the disappointment.

"From my personal point of view, I like to analyse the games but not dwell on them. I’ve already looked at the chances that I had, the chances that the team created, I took my own opinion from them but I’m not going to play them over in my mind and let them get the better of me.

"Chances will come along again and hopefully we’ll be in good positions to qualify for major tournaments in the future and fingers crossed it’s the other way around next time and it goes our way."

Speaking about his personal performance, which included three goal-scoring chances, Browne hopes that he is now part of the midfield conversation and has given the manager Stephen Kenny another option in the battle for a place in the starting eleven.

"I just tried to come on and make as much of an impact as I could. I was involved in a lot of the better chances that we had.

"Maybe I could have done better and, on another night, find the back of the net. But it’s up to the manager now to pick the team.

"The rest of the lads were exceptional right the way through so there is a lot of competition for places and hopefully, I’ve given him a bit of a headache now."

The Ireland squad can now start to build towards World Cup 2022 qualification, and three games into the tenure of the new manager, Browne believes that the players are backing his innovation new approach to how they represent the country.

"It’s still early doors in terms of the manager coming in. It’s difficult to get your ideas across of what you want right away in such a short space of time.

"But the boys have really taken to him, we like his ideas right across the board. His staff are tremendous.

"We’re all excited about where this team is going in the future."