Bohemians left it until the final game of the first phase of the 2020 Women's National League season but they now have a first win to celebrate.

The second phase will kick off on 17 October with the league structure splitting into two - one group of five teams, one group of four teams.

Niamh Kenna went into this season preaching about the potential within a newly-formed Bohemians squad and the midfielder finally got to see that faith rewarded at the Oscar Traynor Centre.

It was just before half-time when Kenna managed to fire Bohs in front and even though it was a nervous second period for the hosts, who held on for a much-needed three points.

A run of five league wins in a row came to a halt for Cork as two second-half goals from Lynsey McKey proved to be the difference in this game.

Cork have been in fantastic form and earned a lot of plaudits as a result - including Saoirse Noonan collecting the Barretstown/WNL Player of the Month award - but it was the visitors that left with the victory.

Billy Clery's side have largely gone under the radar in the first phase but their game-winning ability was on full display here as the wily McKey got them going.Two goals from the experienced striker opened up a lead that Cork could not close in spite of a late goal from midfielder Becky Cassin.

Following back-to-back defeats in the League and FAI Women's Cup, Shels needed to register a response that showed everyone that they are still very much in the title race.

It took time before they could get past a stubborn Treaty backline, but once Emily Whelan got their first goal, it all started to flow for Dave Bell's team with Ciara Grant, Noelle Murray and Whelan again scoring inside the first half.

Ultimately, Shels were too strong for their gutsy opponents with a Jessica Gargan brace and one from Mia Dodd wrapping up a comprehensive win.

The talent of Blessing Kingsley had been recently highlighted and the flying winger lived up to that top billing by getting Wexford off the mark in the UCD Bowl.

Inside the opening half hour Wexford showcased their attacking flair with some clever movement and slick passing and it felt like only a matter of time before they would score and Kingsley did just that.

DLR tried to respond but they could not find that breakthrough that their positive play perhaps merited.

Wexford, in contrast, have several players who know how to grind out results, as well as some exciting youngsters who want to contribute, such as Aoibheann Clancy who netted the second. 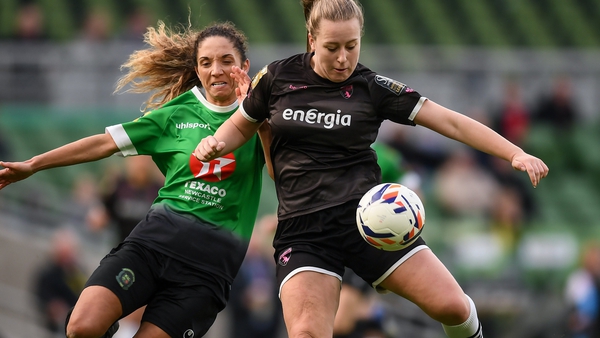