Ireland suffered the pain of penalty shootout defeat, crashing out of Euro 2020 contention in Bratislava as Slovakia beat Stephen Kenny's side 4-2 on spot kicks after extra-time.

There was little between the sides throughout, yet both teams had efforts cleared off the line in the second half as first Lukas Haraslin and then Conor Hourihane came close to breaking the deadlock.

And the two sides could not be separated after 120 minutes of play in the National Football Stadium as the inevitable penalty shoot-out followed.

But it was the home side who proved clinical in the shootout as they scored their opening four penalties, while Alan Browne and Matt Doherty both missed for Ireland.

Drama either side of the start of the game as it emerged just before kick-off that Adam Idah and Aaron Connolly were unavailable to feature having been deemed close contacts of a second backroom member to test positive for Covid-19, and as a result Kevin Long and Josh Cullen took their places on the bench.

And then inside the opening two minutes of the behind-closed-doors encounter, there was a chance at either end as first Callum Robinson latched onto the ball inside the box after some sloppy passing, and while he tried to work space to shoot, he was sent wide of the goal and eventually stopped.

Moments later, Slovakia counterattacked at pace and exposed the Irish high line with Albert Rusnak and Ondrej Duda combining well but eventually closed down before threatening the goal.

In the 11th minute, the hosts had a chance to whip the ball across the Ireland box following a foul by Doherty on Jaroslav Mihalik but strong defending saw off the set-piece danger.

Two minutes later, Ireland worked a fine counter into the opposition half as Robinson was sent down the right after being well-spotted by Hendrick. The West Brom man tried to whip it across the box early but it was cut out by the retreating defender just ahead of the arriving McGoldrick. 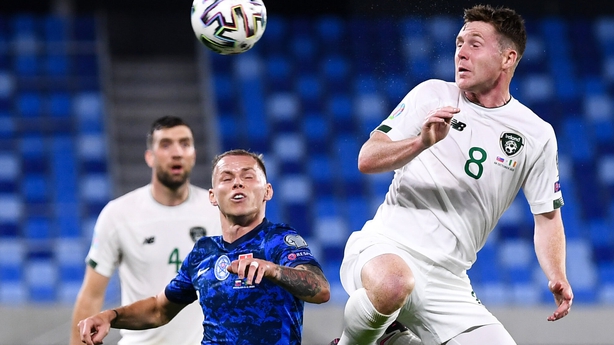 Ireland were starting to boss the midfield and enjoyed a fine spell of lovely play inside the Slovakia half with neat, quick passing keeping the pressure on the home defence.

Ireland again threatened in the 30th minute as Hendrick drove through the middle before the ball was worked out to the left and to James McClean who lifted a neat cross towards the back post.

David McGoldrick arrived at the back stick and made contact but he could not direct the header on goal.

Ireland's best chance arrived in the 37th minute, as Doherty launched a deep ball in from the right, which was well controlled by Conor Hourihane inside the box.

The Aston Villa man did well to tee up McClean who managed to guide his shot towards goal but it was well blocked by Martin Valjent who bundled it away for a corner.

Slovakia gained the upper hand as the break approach but despite some neat build-up play, the Ireland goal had yet to be threatened, and it was Ireland who enjoyed a late chance with McClean and McGoldrick linking well to force another corner.

Ireland's set-piece ball had been poor in the opening 45 and they were almost punished straight from their own corner as Slovakia had two injury-time chances to break the deadlock.

Slovakia broke at pace from their own half and it was three on two for a moment as the ball was worked across the Irish box.

Hendrick got back to half-clear but the ball fell for Duda who made space before whipping a fine effort towards the bottom right corner of the net. 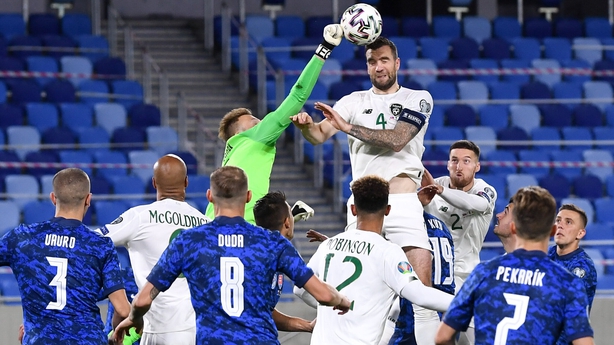 Darren Randolph’s first real test and he passed it with flying colours, as he got down sharply to his left and scooped the ball around the post with a strong save.

And Duda was on hand again from the corner with a fine piece of individual skill as his attempted bicycle kick looked to have the keeper beaten but the ball hopped the wrong side of the post.

A decent start for Ireland as the second half got going and they almost took the lead in the most unlikely of scenarios as Marek Hamsik almost headed a Hourihane free past his own keeper.

The ball was whipped in at pace and his reflex header flew past the near post, just the wrong side from an Irish perspective.

But then the home side started to take control of the game and really had Ireland sitting deep inside their own half leading to a series of corners, which put real pressure on the Ireland goal.

Hamsik’s deliveries, from both sides, arrived with venom but the Ireland defence did their job and saw off the danger.

The Ireland manager made two changes on the hour mark, one tactical, the other enforced.

James McCarthy picked up a knock from an aerial challenge and was replaced by Alan Browne, while Robbie Brady was sent on in place of James McClean. 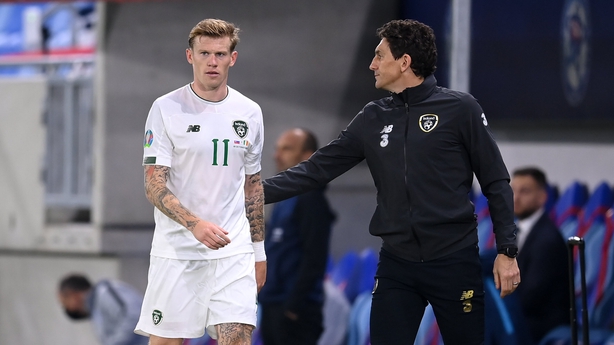 Slovakia maintained their dominance with Hamsik again creating and pushing his side forward, eventually leading to a Rusnak shot that flew high and wide.

Following the substitutions Ireland looked dangerous and they attacked in the 70th minute, Enda Stevens found himself in an advanced role just outside the box before showing great vision to switch the play and find the arriving Browne on the right side of the penalty area.

The first touch set up the shot as Browne crashed a fine effort on target but credit must go to the keeper who got two strong hands behind the ball to save.

More Irish attacks followed as Brady and Doherty were linking up well on the right flank, however, Ireland could not take advantage of the attacking play.

And then in the 75th minute, Slovakia substitute Lukas Haraslin almost put the hosts in front as he watched his chance get cleared off the line.

Hamsik involved once again, whipping the ball into the box, and Doherty should have defended better before the new man found himself in space with only Randolph to beat.

Composed with his first touch, the midfielder made space to shoot before curling the ball beyond the Irish keeper, however, Shane Duffy had read the danger and had dropped back onto the line before making a goal-saving block.

Ten minutes later and it was Ireland’s chance to rue a golden opportunity as McGoldrick dropped deep to pick the ball up, turn and run at the home defence. 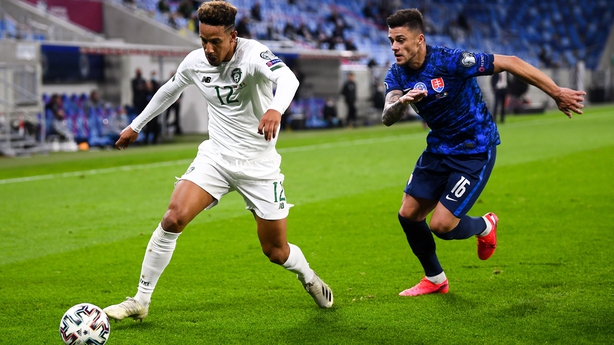 The Ireland forward jinked his way to the edge of the box before rolling the ball perfectly into the path of Robinson, who cut back and fed Alan Browne.

Browne squared a pass to Hourihane, handing the Cork man a gift of an opportunity to lift the ball into the back of the net, but he opted to place and not for power and the ball was stopped on the line.

Both sides looked to win it before the 90 and three added minutes passed, but caution was creeping into the game with neither side willing to gamble as extra time inevitably arrived.

Two chances for the Irish inside the opening two minutes of the first period as McGoldrick burst forward and shot at goal, before Browne had a header from the resulting corner.

Slovakia also worked a chance at goal four minutes in, as a counterattack led to the arriving Haraslin latching onto a deflected shot. The midfielder arced his body to attempt to volley home but he could not work the keeper.

Callum O’Dowda replaced Robinson midway through that opening period and the substitute was involved a minute before the break as Ireland came even closer to grabbing that elusive first goal.

Ireland worked the ball into the box with O’Dowda and Brady linking well before the Bristol City man squared the ball across the face of the goal.

Browne came charging in at the near post and clipped the ball goalwards, but was denied by the width of the post before the home side cleared the danger.

Ireland were certainly the team looking to win it in the extra 30 minutes, although the tempo appeared to drop as the game edged closer to spot-kicks with both sides visibly tiring.

With just over five minutes remaining, O’Dowda took on the Slovakian rearguard, racing right through with real intent. Approaching the edge of the box, Hamsik took a yellow, while handing Ireland a great chance to test the keeper. But again, the set-piece delivery let Ireland down as Brady curled the free wide of the post.

And that was the last real chance of the tie in open play, aside from one heart-in-mouth moment as Randolph played out from the back, as the clock clicked down for the penalty shootout.

The home side would shoot first and they maintained their advantage scoring with the opening three penalties before Browne’s well-hit spot-kick was batted away by a full-stretch save by Marek Rodak.

Substitute Jan Gregus then added a fourth consecutive strike, which put the pressure on Doherty just to keep his side involved.

However, the Spurs defender crashed his effort off the underside of the bar, leading to wild celebrations from the home side who will go on to face Northern Ireland in the play-off final next month. 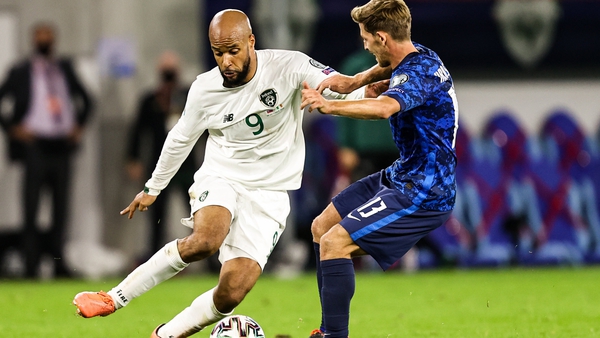 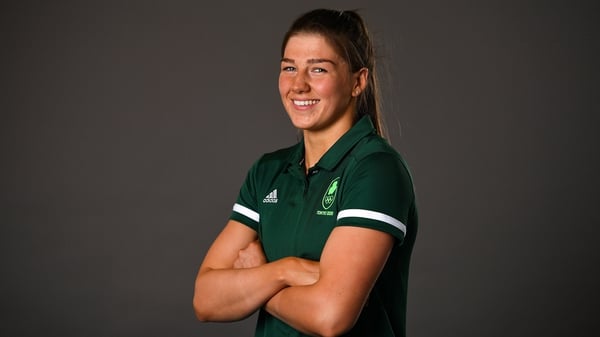 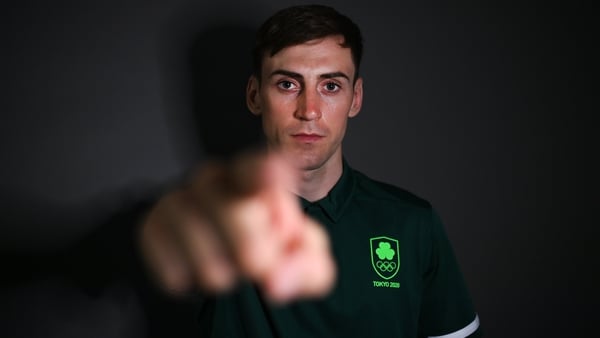 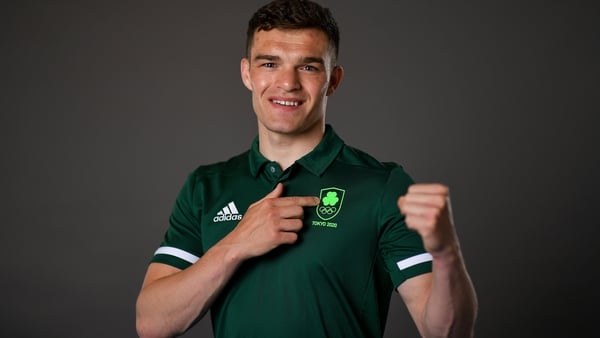