The First Division title race took another twist as Longford Town were thumped 6-2 at Bishopsgate by an inspired Galway United on Saturday night.

The hosts could have closed the gap to table-toppers Bray Wanders to three points with a win and they were 2-0 up inside 33 minutes thanks to Rob Manley and Adam Evans. Then, the wheels came off.

Mark Ludden got one back a minute before half-time, and struck again a minute into the second half to level things up.

Enter Carlton Ubaezuonu who fired John Caulfield's men ahead on 62 minutes, struck again four minutes later and completed his hat-trick with ten to go. Wilson Waweru got in on the act in between Ubaezuonu's second and third goals.

Last night Drogheda United were beaten 2-0 by Athlone Town at United Park, allowing Bray to leapfrog them into top spot with three games to play.

In the evening's other match, Cabinteely dramatically beat Cobh Ramblers 2-1 to go level on points with Longford and keep alive their hopes of snatching second.

It looked like that's how it would end but Kieran Marty Waters won it for Cabo with a cool 94th-minute finish from inside the box. 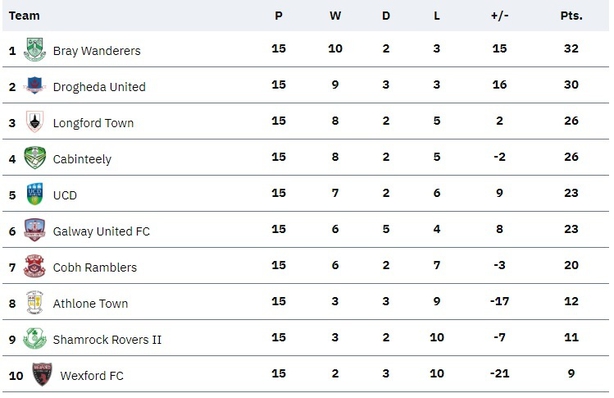