Tim Clancy's men were top of the table heading into this one, aware that four victories from their last four games would seal the league and send them back to the Premier Division.

However, Athlone tore up the script as they moved off bottom spot.

The deadlock was broken with 19 minutes to go when Taner Dogan was taken down in the box and Ronan Manning slotted home the resultant penalty.

In the 83rd minute, jaws hit the floor as Dogan unleashed an incredible shot from just inside the home half that sailed over the keeper's head and into the net.

The result opened the door for Bray Wanderers to go top and they took the opportunity with both hands, defeating UCD 3-1 at Belfield.

Gary Shaw put them ahead after just three minutes when he swept home Dylan Barnett's cross.

Colm Whelan levelled it up in the 42nd minute but 17-year-old Darragh Lynch put the visitors back in the lead three minutes in to the second period and Barnett wrapped it up with a 61st-minute free-kick.

Brandon Kavanagh put them ahead in the fifth minute, with Dylan Duffy doubling their advantage nine minutes later. The result sees Wexford slump to the bottom of the table 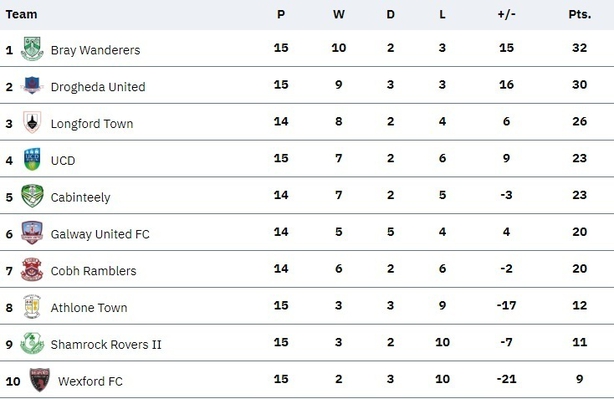