The riches on offer for reaching the group stages of the Europa League would have a transformative effect on Faroese football, but could impact the competitiveness of the league, according to a former national captain.

Atli Gregersen, who won 39 caps for the Faroe Islands and was captain during Brian Kerr's time in charge of the country, will be watching on with great interest when Klaksvíkar Ítróttarfela, known as KI, take on Dundalk in the Europa League play-offs (live on RTÉ2 & RTÉ Player from 7pm).

The Lilywhites and Shamrock Rovers have both made it to the group stages in the last decade, but KI are the first team from the Faroe Islands to even reach the final qualifying round.

The prize on offer for Thursday’s winner at the Aviva Stadium is a financial reward in the region of €3m and Gregersen, who retired from international football last November but is still playing in their Premier Division. For fourth-placed Vikingur, says the consequences could be far reaching.

"It’s the talk of the country," he told RTÉ Radio 1’s Morning Ireland.

"Some people are worried that it will ruin the competitiveness of the Faroese League in the next five to 10 years. The money would blow every team out of the water.

"Everybody is looking at the money and I think that is a little sad. It’s a massive opportunity for Faroese football to grow, and same for Dundalk, it’s a chance to grow and a once in a lifetime opportunity."

KI caused ripples when they dumped Dinamo Tbilisi out of the competition with a thumping 6-1 victory in in Tórshavn.

Having qualified for Europe for the past four years, it is a team with plenty of nous and an ability to adapt to a higher calibre of opponent according to Gregersen.

"They are a very solid unit and the Faroese players in the team are international players. They are well organised and have been working towards this for four or five years.

"They are very comfortable sitting back. They play two strikers up front and when they get the ball they launch it into spaces. They are good on the ball and have a lot of runners in midfield

"In European games they have been playing with no risk. We should expect them to sit in and try to catch Dundalk on the counter-attack."

These are exciting times for Faroese football. On Saturday, Joan Simun Edmundsson became the first Faroe Island player to play and score in the Bundesliga when he came off the bench to score the winner for Arminia Bielefeld.

KI’s win over Tblisi has taken them to uncharted waters while the national team began its Nations League campaign with wins over Malta and Andorra.

"Good things are happening in Faroese football at the moments," Gregersen added.

"If KI manage to get through to the group stages, then maybe the players would all be full-time professionals. This could be a massive lift-off." 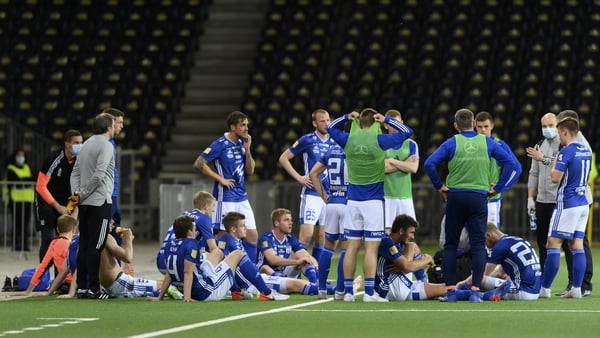 KI keeper Jarosinski: When we win, the entire Faroe Islands might take a day off