Rianna Jarrett and Denise O'Sullivan made an impact off the bench for Brighton, but could not prevent a Women's FA Cup quarter-final exit to Birmingham after a penalty shootout.

Birmingham opened the scoring inside five minutes with a powerful close-range effort by Sarah Mayling after Abbi Grant's cross from the left, before Brighton drew level in the 25th minute courtesy of captain Danielle Bowman's calm spot-kick.

Mollie Green restored Birmingham's lead with an early second-half penalty but Brighton upped the intensity and were rewarded for their efforts with a last-minute equaliser. Substitute O'Sullivan, on loan from North Carolina Courage, found herself unmarked in the box and headed home Fliss Gibbons' cross to take the match to extra time.

A flurry of opportunities followed. O'Sullivan's fellow Republic of Ireland international Jarrett's strike was well stopped by Birmingham goalkeeper Hampton, while Jamie-Lee Napier went close with a curling shot at the other end, but the two sides could not be separated and it remained 2-2.

Birmingham will now face Everton in the semi-finals on 30 September. 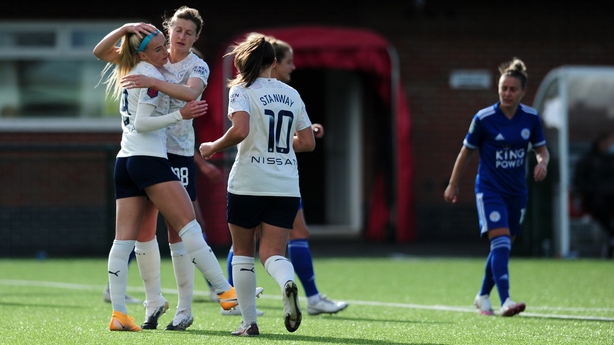 Kelly opened the scoring with a penalty after Stanway was brought down, stepping up to send a powerful right-footed effort inside the left post.

Stanway added a fine individual second as lobbed the goalkeeper from just inside the area.

Leicester pulled one back late on through another penalty. Millie Farrow was fouled in the area and Charlie Devlin made no mistake with the spot-kick.

However, they could not find a leveller as Manchester City booked a semi-final meeting with Arsenal.