Bruno Fernandes converted a penalty deep into added time as Manchester United snatched a dramatic in from an incident-packed encounter at Brighton.

Fernandes coolly converted from 12 yards with the last kick of the game after referee Chris Kavanagh penalised Neal Maupay for handball having consulted the pitchside monitor.

But, after Kavanagh initially seemed to have blown the full-time whistle, Fernandes had the final say.

A Lewis Dunk own goal had quickly levelled Maupay's cheeky opener from the penalty spot just before the break but the goals were far from the full story.

United, who struggled to impress and were second best for much of the afternoon, also had two goals disallowed, while the Seagulls remarkably struck the woodwork five times and had another spot-kick award overturned following a VAR review.

Brighton boss Graham Stephen Potter, as he was named on the official teamsheet, felt United were the best team to visit the Amex Stadium last season.

After the unexpected loss to Palace, the 20-time English champions were bidding to avoid suffering successive defeats at the start of a Premier League season for the first time in 28 years.

That unwanted statistic looked likely to materialise when Leandro Trossard struck both posts from the edge of the box and Albion team-mate Adam Webster headed against the crossbar inside the opening half an hour.

The recalled Greenwood later had an effort ruled out for offside against Rashford in the build up, before Albion striker Maupay opened the scoring with his third goal in two games. 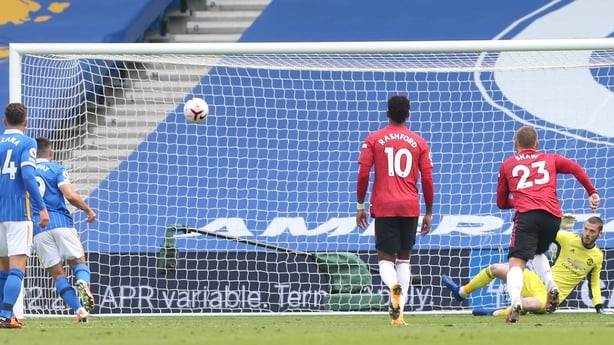 The Frenchman, who registered a brace at Newcastle last weekend, audaciously dinked home from 12 yards after Fernandes was penalised for a challenge on Tariq Lamptey.

Having secured the advantage their display merited, the Seagulls surrendered it just 194 seconds later to go in level at the break.

Fernandes' pacey free-kick from the left was turned across goal by Matic before Dunk, under pressure from Harry Maguire, diverted in the fifth Premier League goal of his career. 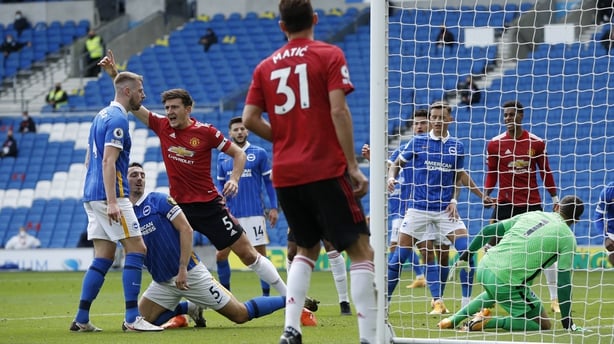 With the equaliser being credited to Dunk, United's first attempt on goal eventually arrived in the 44th minute when Matic's thunderous drive from distance flew straight at Ryan.

Brighton, buoyed by three successive wins without conceding in league and Carabao Cup, were playing with plenty of confidence and stretching the pitch at every opportunity as United continued to stutter.

The hosts thought they had an opportunity to quickly regain the lead within two minutes of the restart.

But, after initially penalising Paul Pogba for a trip on Aaron Connolly, Kavanagh reversed his decision after watching the incident on the pitchside monitor.

Minutes later it was United's turn to be thwarted by VAR. Rashford turned the ball into the net but, despite the flag not originally going up, he was clearly offside. 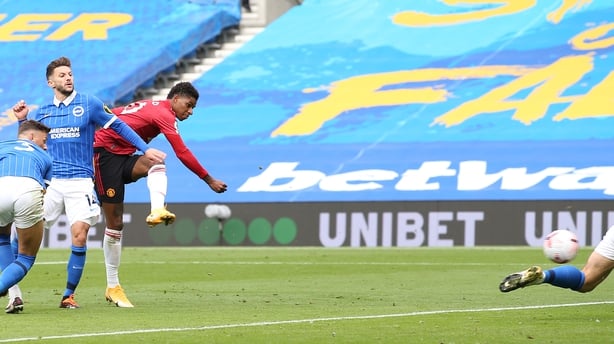 However, Rashford was not to be denied for long and he put United 2-1 up with a fine individual effort.

After collecting the ball from Fernandes, he danced around the Seagulls defence during a mazy run which received the emphatic finish it deserved.

Brighton were far from beaten and deserved a point at the very least. March saw a low effort rebound off the inside of the right post, before Trossard completed a hat-trick of sorts by thumping against the bar.

United, who return here in the fourth round of the Carabao Cup on Wednesday evening, looked to have survived the pressure before the unmarked March sparked wild celebrations by nodding in from close range. 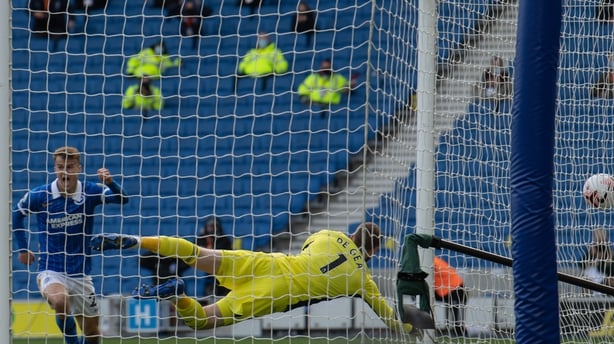 However, there was a late twist in the tale.

Players from both teams surrounded match official Kavanagh during a remarkable ending to the game which culminated in Fernandes' calm spot-kick after Maguire headed against the outstretched arm of Maupay.

Amid the melee, the Portugal international was the calmest man in the stadium as he duly dispatched the ball high into the top-right corner to cap a crazy encounter.

Fernandes told BT Sport afterwards: "It was a difficult game. We left so much space for them to play and weren't as aggressive as we want (to be). We gave away two goals and can do so much better.

"Brighton did very well. Everyone can say they deserved more, but the point is to score more goals, not hit the crossbar or post."

Potter said: "We had more chances and shots and hit the woodwork a few times but sometimes football's not fair - I have to accept that, as much as it's painful.

"We played with real courage and spirit - I'd say we deserved something from the game, I would say that's an understatement.

"I thought we scored with the last kick of the game - I don't know where the extra time came from to be honest.

"We are bitterly disappointed to concede the way we have, at the time we have. "