Sheffield United will be without John Egan and the injured Lys Mousset when Leeds visit Bramall Lane in the Yorkshire derby on Sunday.

The Republic of Ireland international misses out because of his 12th-minute dismissal in the 1-0 defeat at Aston Villa, meaning Ethan Ampadu could make his first Premier League start for the Blades since joining on a season-long loan from Chelsea.

Blades manager Chris Wilder couldn't hide his frustration with referee Graham Scott's dismissal of Egan on Monday night - "I just don't understand why that decision was first made as a straight red and no dialogue with the assistant referee" - with veteran centre-half Phil Jagielka is in contention to replace the Cork man.

Forward Mousset misses out again with an ankle problem.

Boss Marcelo Bielsa remains without midfielder Pablo Hernandez after he suffered a groin injury in the warm-up before last weekend's win over Fulham but otherwise has no new injury concerns.

Captain Liam Cooper is poised to make his 200th appearance for the club. 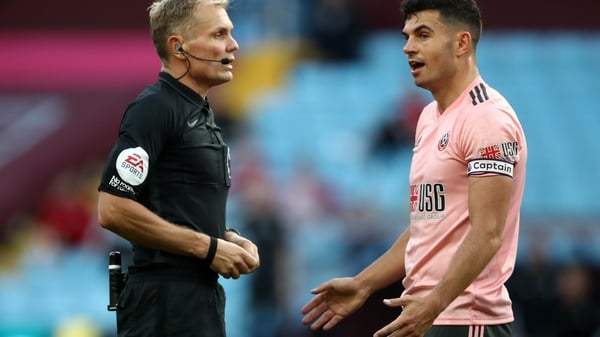