Frank Lampard has admitted he will need to boost Kepa Arrizabalaga's brittle confidence after the goalkeeper’s latest mistake in Chelsea’s 2-0 Premier League loss to Liverpool.

Andreas Christensen’s red card handed Liverpool an advantage they fully exploited, but Blues boss Lampard conceded Kepa was at fault for the second goal – and is in desperate need of a confidence boost.

Lampard revealed veteran Willy Caballero will start Wednesday’s League Cup clash with Barnsley at Stamford Bridge, but insisted that was always the plan, even before Kepa’s latest costly error.

"It’s a clear mistake that has cost us," said Lampard.

"Because we went on to have a penalty, things could be different if we score, and fine margins like that change games.

"So we have to keep working, Kepa has to keep working and he has to have support around him, that’s very clear. But it was a clear mistake on the day.

"And now we’ve got to try to give him confidence, because that’s important. It’s a clear mistake, he’s accepted that and we have to hold our hands up to that.

"Nobody tries to make mistakes in football, that's the nature of the game. So we have to be strong and keep going."

"I can say now that Willy Caballero will play against Barnsley, and that was always my feeling to play him on Wednesday, regardless of today. So I don’t want people to make judgements on that game itself.

"He’s our player and it’s clear now from the two games, today was a clear mistake and there was a mistake at Brighton as well, and he’s reflected on that in that way.

"Nobody tries to make mistakes in football, that’s the nature of the game. So we have to be strong and keep going."

Rennes stopper Edouard Mendy is close to completing a move to Chelsea, but Lampard has upheld his policy of refusing to talk about players from other clubs.

Kepa’s poor form from last term has spilled into the new campaign however, and the £72million signing in 2018 appears to face a hugely uncertain future at Stamford Bridge.

"I don’t have news on the Mendy one so I’ll stay away from that," said Lampard. "Until anything’s confirmed you should never speak on other players, so that’s that." 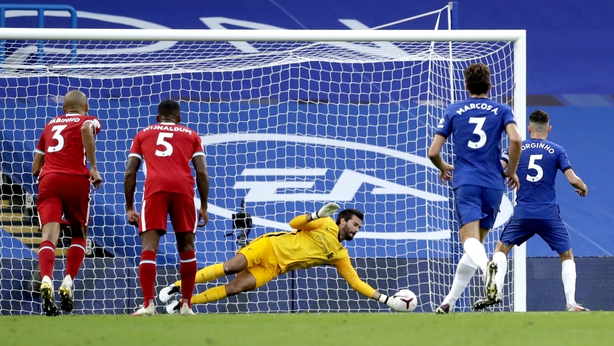 Liverpool dominated Chelsea once the Blues were reduced to 10 men, with new boy Thiago Alcantara impressing off the bench after replacing Jordan Henderson.

Henderson suffered a knock to his thigh that Klopp does not expect to keep him sidelined for any length of time.

Thiago excelled off the bench in Henderson’s stead though, leaving Klopp to praise the Spain midfielder.

"Jordan (Henderson) said he had a knock and I told him not to carry on because we didn’t want to take a risk with him," said Klopp.

"But then even without training, and albeit against 10 men, Thiago set the perfect play in that position.

"Everything he did was perfectly natural. Alisson saved a penalty, Thiago made his debut – and if Hendo has absolutely nothing to his injury, it’s a perfect day."

Klopp added: "(It was a) super game to be honest, OK first half no goals but a really good game from both teams.

"I liked our game a lot, it's really tricky, Chelsea is a top side.

"Maybe not tuned 100 percent offensively because that is clear and in these positions (Kai) Havertz and (Timo) Werner, it might take some time but really, really good.

"Our own football I liked, really good situations, we passed through the lines, good organisation and that was all good but we didn’t score and the last situation before half-time – the red card – so second half was a different game."