The Blues have shelled out more than £200m on a string of high-profile new arrivals, and Lampard fully expects his Stamford Bridge rebuild to remain a work in progress for some time.

While Werner showed up in style, fellow Germany star and new boy Kai Havertz could only offer glimpses of his clear talent in a rusty league debut.

Ruben Loftus-Cheek struggled to get to grips with a more advanced role designed to maximise Werner’s impact, allowing the pacy striker to cut in from the left.

The England man is still easing past the long-term achilles problem that kept him out of the bulk of last term though, and Lampard will certainly give him leeway for an off-kilter outing.

With Hakim Ziyech, Ben Chilwell and Thiago Silva yet to feature and more new recruits still to arrive, Chelsea’s promise is not in doubt. Add greater fluency and extra defensive shape, and Lampard could be on the track so craved in west London. 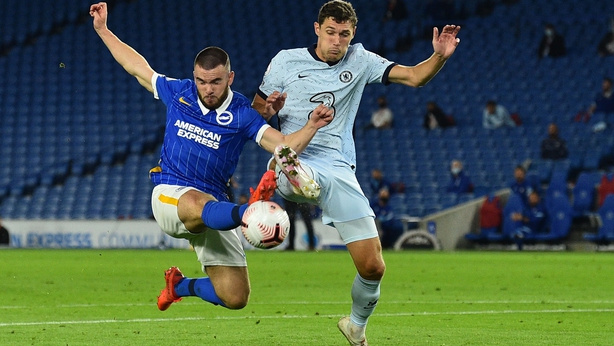 Chelsea’s first half was punctuated by a number of miscued balls and mistimed runs, but the Blues appeared a threat thanks to Werner, and the Germany hitman’s speed off the mark proved pivotal to the visitors taking the lead.

Werner caught Maty Ryan by surprise by latching onto Jorginho’s through ball into the area, and Brighton’s keeper left himself with little option but to check the German’s run.

Jorginho won whatever argument there was for the spot-kick and duly converted via his trademark stepped run-up.

Former Chelsea full-back Tariq Lamptey stood up well for Brighton and would have had an assist if only Neal Maupay could have connected fully with a teasing cross.

Steven Alzate drew a smart save from Kepa Arrizabalaga, with Chelsea’s continually questioned keeper reacting well to the 20-yard drive.

Werner cut to the byline from the left and drilled low on target at the half’s death, but Ryan was equal to the snapshot.

Chelsea paid for their failure to find any rhythm after the interval, with Trossard’s dipping effort evading the doubtless frustrated Kepa. The Spain stopper would surely have expected better from himself but failed to lay a glove on the long-range strike that had Brighton on level terms.

While the Seagulls were still reliving that equaliser, Chelsea raced onto the attack and James lashed an even better strike into the top corner. The England Under-21s full-back’s bullet finish was as eye-catching as it was timely, immediately digging the Blues out of that self-inflicted hole.

Lewis Dunk should have punished Chelsea again but could only nod wide from four yards out when totally unmarked at the back post.

Chelsea seized on the reprieve and duly extended their lead courtesy of a slice of fortune, as Zouma’s strike deflected heavily off Adam Webster to roll into the net past the wrong-footed Ryan.