Lionel Messi will remain as Barcelona captain despite his turbulent pre-season.

The club confirmed on Saturday that Messi, Sergio Busquets, Gerard Pique and Sergi Roberto will remain as the club's top four options for the armband.

Messi then wore the armband while playing the first half of the evening’s friendly against Gimnastic Tarragona.

The Argentina star, who has spent his entire career at the Nou Camp after graduating from the club’s La Masia academy, informed Barca last month that he wished to activate a clause in his contract to leave on a free transfer.

He did not turn up for a scheduled Covid-19 test ahead of the squad’s return to pre-season training – but after giving an interview to Goal in which he revealed he would stay rather than get into a court battle over the contract clause, he rejoined the squad on Monday.

The upheaval has not affected Messi’s standing in the squad and he will captain the side for the third straight season.

"The four captains from La Masia continue at Barca for the third successive season. The players who will wear the armband are Leo Messi, Sergio Busquets, Gerard Pique and Sergi Roberto, in that order.

"Since the departure of Andres Iniesta in 2018 the Argentine has had the job of captaining Barca. The blaugrana number 10 is in his 17th season at the club and his third as captain."

Midfielder Busquets, defender Pique and the versatile Sergi Roberto have been Messi’s deputies since he inherited the armband and will remain in place.

Barca won the friendly with Nastic 3-1 thanks to Ousmane Dembele’s early strike and penalties from Antoine Griezmann and Philippe Coutinho. Javi Bonilla scored for third-tier Nastic. 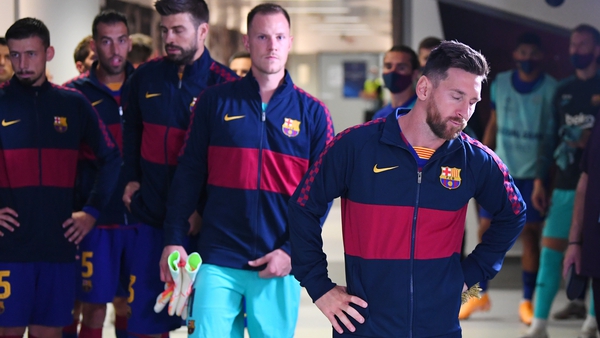 Lionel Messi will stay at Barcelona for another year