Jeff Hendrick scored a debut goal for a perfect start to life at Newcastle who claimed a convincing 2-0 win away to West Ham.

Fellow debutant Callum Wilson, signed last week for £20million from Bournemouth, grabbed his eighth goal in nine appearances against the Hammers for a well deserved victory.

It was another miserable start to a season for West Ham who have now lost their last five opening-day matches - a Premier League record.

And with a horrendous run of fixtures to come they could already be in serious trouble by the end of October.

They were in a mild state of disarray even before a ball was kicked this season, having angered fans and players - notably captain Mark Noble - with the controversial sale of Grady Diangana to West Brom.

That, and the lack of incoming transfers, has seen the club's board come under fire again and, even though supporters are still not allowed in, a handful gathered outside the stadium to protest.

The hosts not only had to contend with Wilson, but also the return of their former wrecking ball striker Andy Carroll who took just 20 seconds to announce he was back, planting a stray elbow into the face of Tomas Soucek.

Despite the recent failed Middle East takeover attempt at Newcastle, there seems to be some cause for optimism at the club for a change.

Two of their summer recruits twice combined well in the opening stages to almost put them ahead, Wilson narrowly off target with a near-post header and then a shot from Jamal Lewis' crosses.

With Newcastle on top, Hammers goalkeeper Lukasz Fabianski had to make a sharp save to block a Federico Fernandez header, while Jonjo Shelvey hit the side-netting, Carroll volleyed over and Wilson curled inches wide. 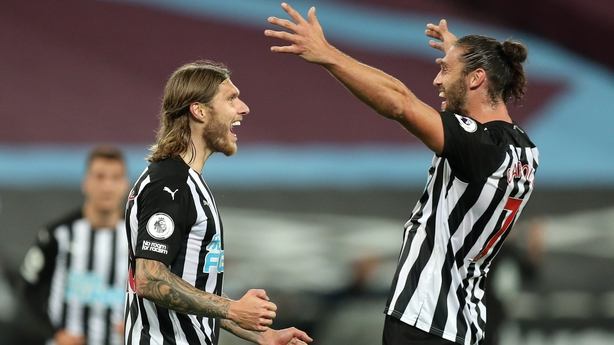 However, against the run of play, it was West Ham who came closest to opening the scoring in the first half, twice hitting the crossbar through Angelo Ogbonna's header and a deflected Pablo Fornals effort.

Soucek also glanced a header wide from Ryan Fredericks' cross and Jarrod Bowen fired too high as the half came to a close.

Newcastle continued to press after the interval and made the breakthrough in the 56th minute.

Javier Manquillo reached the byline and looped a cross towards the near post which Hendrick flicked on for Wilson to bundle home.

West Ham attempted to hit back and were furious not to be awarded a penalty when Sebastien Haller's shot struck Hendrick's arm.

But their miserable evening was compounded when Hendrick found the top corner from 15 yards with three minutes remaining.