Finn Harps manager Ollie Horgan was left to rue his side's ill-discipline after their 3-1 loss to Sligo Rovers last night.

The Donegal side had Mark Coyle and Kosovar Sadike sent off, both for two bookings, and the yellow card count was nine to two against Harps.

The sides were level when Coyle saw red on the hour mark, soon followed to the stands by Horgan, who was dismissed to the line by referee Rob Harvey.

The result left Finn Harps bottom of the table, one point behind Cork City after ten games.

Ollie Horgan was keen to debate whether last night's game between Sligo Rovers and his Finn Harps side was a "dirty" one.

He also explained his red card, one of three on the night, and the 9-2 yellow card count. #rtesoccer https://t.co/8TkvK7vcsS pic.twitter.com/Fhxt2vm36G

"Probably the sending off is what turned the game," Horgan told RTÉ Sport.

"Look, that’s not what happened and we can only blame ourselves for that. I don’t think it was a dirty game. It was a derby game.

"The yellow count card was nine to [two]. That’s where we’d have an issue. We should have kept 11 players on the pitch and that’s why we lost the game.

"Well done to Sligo, they’ve turned it around to their credit, they’ve some smashing footballers and we wish them well." 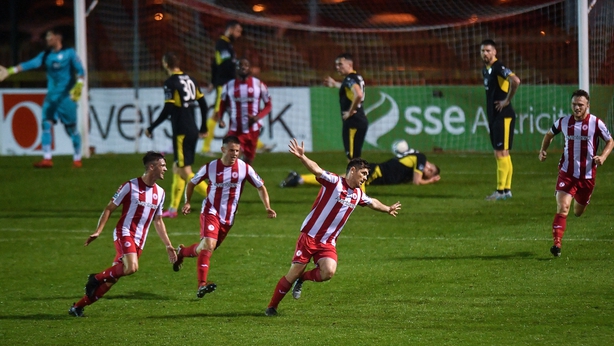 Rovers now find themselves in third place in the SSE Airtricity League Premier Division, all of their 15 points gained post-shutdown.

"There wasn’t a lot in the game for an hour, a draw was probably a fair result, a fairly scrappy game," he said.

"It’s probably as poor as we’ve played this season for the first hour.

"The last half hour we got back into it and I think the sending off had a big bearing on the game.

"It was fairly feisty, to put it mildly. But from where we at it was just an important win for us. We picked up results over the last few weeks and we’ve a bit of momentum going.

"We are not getting ahead of ourselves. It’s amazing what can happen over a few weeks. We’ll keep our feet on the ground."

Sligo are away to St Patrick's Athletic on Saturday, while Harps host Derry City on Sunday.