Stephen Kenny has confirmed that he has a fully fit squad to choose from for his first competitive fixture as Republic of Ireland manager ahead of Thursday's UEFA Nations League clash with Bulgaria in Sofia.

The new Ireland manager had to cope with the loss of some players from his initial squad, as Troy Parrott and Kieran O'Hara had to pull out through injury, while there were also injury concerns around midfielder James McCarthy.

Sean Maguire, Dara O'Shea and Caoimhin Kelleher were all added to the travelling party for Bulgaria and the manager confirmed that all his squad were now fit and available for selection.

Despite media reports claiming that the manager was set to drop captain Seamus Coleman and play Matt Doherty at right back for his opening encounter, Kenny stated that he had not yet decided on his starting eleven.

Ireland have not played since their 1-1 draw with Denmark last November and following a change of manager, Kenny has only had a few days to work with his new squad, while also having to deal with the fact that many of his side had played competitive 90-minute games at the weekend.

"Everyone who travelled, they're fully fit and available for selection," said Kenny, speaking from the team headquarters in Sofia on the eve of the big game.

The manager would not get drawn into the Doherty versus Coleman debate, stating that he has not decided on his final selection as he has been too busy trying to work with the squad on how they are going to play in Sofia.

"We've been working over the two days on how we'll play, but no, I have not picked the team yet.

Pushed on the matter, Kenny was asked if he could confirm whether Coleman or Doherty would play. 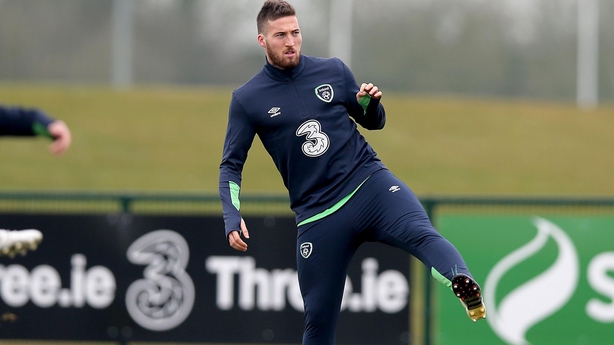 The manager did admit that time constraints have forced him to limit the amount of work with the players during this opening week of his senior international career.

This was a result of many of the players needing more recovery time from their weekend endeavours, coupled with the fact that this particular camp has been quite short, with a Thursday kick-off and a travel day to also negotiate.

"We've had to manage obviously, we didn’t anticipate that so many would play 90 minutes last Saturday in pre-season because when we had them on Monday, we had to modify our training a little bit."

And while Kenny admitted that he would have liked more time with his players - a common conundrum for international managers - he said that he was conscious that it would be futile to attempt to do too much too soon with his new squad.

Kenny's main concern ahead of his first game was to get to know the players and have his side in peak condition by the time kick-off comes around on Thursday evening.

"There are a lot of really good people [in the squad], a lot of humility, and that’s very evident," he said.

"There is great humility in this group of players.

"We had to plan carefully, there is no point trying to do too much too soon. We had to make sure players stay fit and and be ready for Thursday in the best possible condition.

"While we’ve some work, ideally you’d want to do more, but you can’t force that in three days training. That’s where we are."