Jose Mourinho says viewers will see the "real Jose" during Amazon Prime Video's All or Nothing documentary on Tottenham and not the "crazy guy" who appeared in leaked clips.

The Portuguese manager became the leading man of the nine-part series - the first three episodes of which are released on Monday - when he took over from Mauricio Pochettino in November.

It proved to be a perfect appointment for the producers, who have admitted to pinching themselves, as Mourinho provided insight into the methods of one of the most successful managers of all time.

In the build-up to the documentary's release, clips emerged online of a team meeting where Mourinho accused his players of being too nice, delivered with an eye-watering amount of expletives.

But the series also shows a softer side to him as he engages with his players on a one-to-one basis while also giving them rewards and praise.

Mourinho says what is shown was entirely real.

"If people only watch the video that was leaked, people will think that I am a crazy guy," he said. "I don't know, but they will see the real Jose.

"As I was saying before, nothing is fake. Lots of people will have a perception about me and now they can confirm if the perception is correct.

"If they misjudge me and they analyse me in the different perspective, I really don't know. The only thing that I know is that I am that and what they watch is what I am as a football coach in my football, day by day." 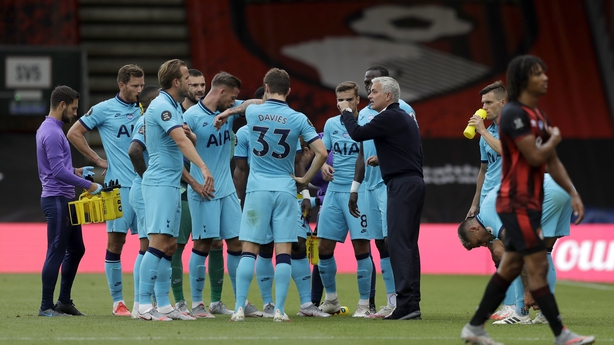 Following his appointment at Spurs, Mourinho regularly mentioned the presence of the cameras, giving the impression he was not happy about the situation.

Although he admits there were times when it felt "weird" after an intimate moment was caught on camera, he says he learned to live with it.

"Sometimes I forgot! I think the beauty of the filmmaker's work is that nothing is fake," he said.

"If I was somebody looking in from the outside, what would attract me about the series would be how genuine and real it is.

"You can only be real if the actors, let's say that's all of us, don't think about it. We just do our lives.

"Basically, for the majority of the time I forgot that the cameras were there or I tried to ignore them, because to do my job properly I cannot check whether the cameras are there.

"But in the end we learned how to live with it and it was fine.

"The dressing room is like a temple. We used to say what happens inside stays inside.

"So to imagine that people would be able to watch a half-time team talk, along with all of the good, bad and crazy moments, is great.

"We are giving people access to all of the things that you normally aren't able to show. And I can promise because I know that everything was real in this case. Nothing was prepared. Everything was just us."

At 57, it would be easy to say Mourinho is heading towards the twilight of his managerial career, but he insists he is still getting better.

"First of all, because I'm very young," he said when asked how he stays motivated. "People think I'm very old because I have been at this level since 2002.

"I'm not very old. I'm very young for a football manager. It's the kind of job where you become better with experience and not worse.

"I am not impulsive any more. I am more in control of my emotions. I think better, decide better. I think a coach, the older you get, there's an accumulation of experience.

All or Nothing: Tottenham Hotspur launches exclusively on Amazon Prime Video on 31st August 2020 with new episodes available each Monday