Vera Pauw will remain as manager of Republic of Ireland if the side qualifies for the 2021 UEFA Women's European Championships, the FAI has announced.

Pauw, who took charge of the team in 2019, is contracted until the end of the current qualifying campaign but this will be extended should the team secure a place at the finals tournament, which will be held in July 2022.

Following the outbreak of the Covid-19 pandemic, the Euros were moved on a year - even though the tournament still carries the name of 2021 UEFA Women's Euros - and that is what Pauw is aiming to guide her team towards.

Unbeaten in qualifying after five games played, Ireland currently sit top of Group I with three games left to play - away to Germany (19 September), away to Ukraine (23 October), and home to Germany (1 December).

"It is fantastic to have the support of the FAI as we look to secure qualification," said the Dutch woman.

"We know that there is a lot of hard work ahead of us with three big games still to play, but it is a challenge for which we do everything in our power to succeed.

"The assistance of Ruud Dokter, Eileen Gleeson and Jan Willem van Ede has been invaluable since taking over as manager, so too has been the work of our backroom staff and the response from the players.

"If we can continue to work together then I'm sure that we will perform to our max at the moment." 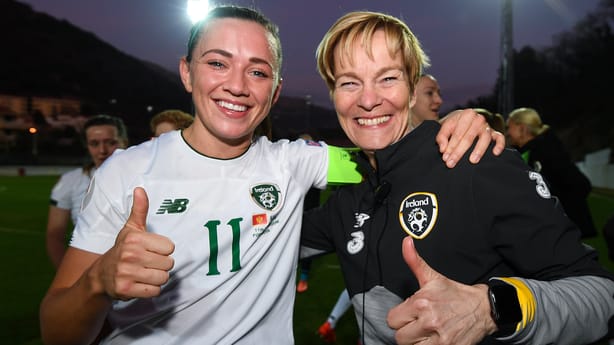 FAI High Performance Director Ruud Dokter said: "We are delighted to have been able to finalise terms with Vera and get everything agreed so quickly, which showcases Vera's desire to continue with the team.

"Vera has made a significant impact since being appointed as Women's Senior Team Manager and that is reflected not only in the results of the team, but their performances, the professional structures she has introduced, and the work she has put in to plan for a brighter future.

"This is an exciting period for Irish football and the Women's Senior Team are in a very good position in terms of qualification for the next European Championships.

"We will provide Vera and the players with all of the support that they require to push towards qualification for a first ever major international tournament."