Shamrock Rovers defender Roberto Lopes admits it is "exciting times" at Tallaght Stadium as the Hoops finalise preparations for their Europa League first-round clash with Ilves Tampere on Thursday evening.

Stephen Bradley's side hold a two-point lead at the top of the SSE Airtricity League with just one series of matches to play, and were the only Irish side drawn at home in European competition this year.

With an FAI Cup last-16 tie with bottom side Cork City next Monday, and what is going to be the most important Dublin Derby in recent times to come five days later, there is huge anticipation in south Dublin over what is to come.

Speaking to RTÉ Sport’s Eamon Horan, the Cape Verde international said: "It's exciting times. With the shortened season we are in the final stretch now.

"It's a big couple of weeks ahead of us with some big games coming up. It's where you want to be and in the mix at the end of the season.

"It's fantastic. For us as a team, it's where you want to be. You want to be in the mix for everything, the league, the FAI Cup and in Europe.

"Hopefully we can continue this for a bit longer with a good result on Thursday." 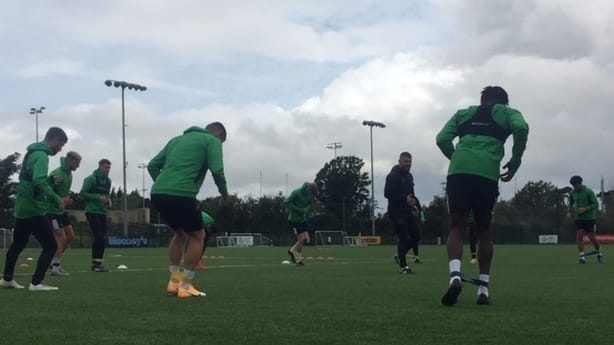 Ilves Tampere were fourth place in the Finnish League last season but do not possess a strong European record.

Their last appearance was 2018 when they lost 3-1 on aggregate to Slavia Sofia of Bulgaria.

However, Lopes has seen enough of the opposition to know they possess a major threat.

"We know they are a really good side. We have watched videos of them. They look very sharp, intense and will come at us. It looks like it'll be a really exciting game.

"They like to keep the ball, play out from the back and be on the front foot early doors. They are very dangerous when they transition from defence to attack and get bodies in the box. They look really tough opposition.

"Being at home is massive. We need to take full advantage of it. It's only one leg and that is a major advantage. We need to capitalise on it.

"There is no travelling or familiaring ourselves with a stadium. It is big for us and we can really drive it home and make full use of it.

"I don't know if it makes it easier in that it is a one-off game, but I can see both teams going for it early doors.

"You can feel each other out and see what you can do in the second leg. You really have to go for it. It might make for an open 90 minutes."