Derry City fell at the first hurdle in their Europa League qualifying campaign when they were edged out after extra-time by Lithuanian side Riteriai.

Declan Devine's side will feel that was a missed opportunity for them as they came out second best in a game they dominated for large periods.

Joe Thomson’s first goal for the Candystripes gave them the lead that their impressive start deserved, but they let the hosts back in with a sloppy goal from Gytis Paulauskas on 39 minutes and then went behind just after half-time with the same player scoring again.

The Candystripes levelled with a booming header from Eoin Toal and looked the more likely winners in normal time, but a wonder-strike from Donatas Kazlauskas just after the start of the first-half of extra-time proved to be decisive.

It was a bright start from Derry, who settled the quicker of the two sides on the artificial surface at the LFF Stadium.

From the early stages, Derry found space to exploit out on the flanks, and with just six minutes gone they created an opening for Ciaran Coll on the edge of the penalty area, only to see his effort blocked. The ball dropped to James Akintunde who crossed and while Riteriai cleared, they looked nervy.

Coll was at the centre of things for the visitors shortly after when he burst down the left wing and cut back a low cross for the on-rushing Jake Dunwoody, but he was unable to get the kind of connection he needed on his first-time shot and the ball drifted wide.

By now Derry were playing with confidence and they got the goal they deserved on 18 minutes when a ball into the penalty area was taken down by Ibrahim Meite and delivered into the path of Thomson, who took one touch to set himself before firing into the bottom right corner. 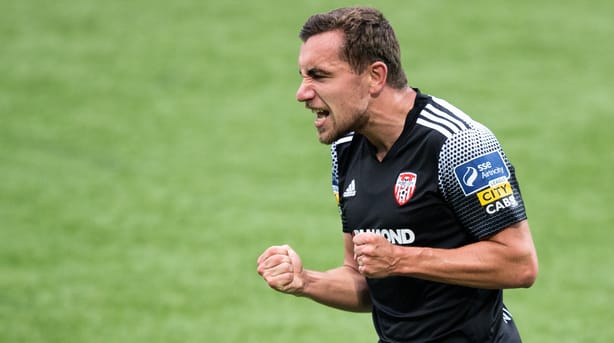 However, the visitors failed to build on that goal and sat back, inviting Riteriai into the game.

There were warning shots as Lajo Troare and Mindaugas Grigaravicius both went close before Gytis Paulauskas levelled on 39 minutes.

Derry were caught flat-footed down the right flank and Donatas Kazlauskas burst into space before cutting back a dangerous cross to the near post which Paulauskas angled goalwards. Peter Cherrie got two hands to the ball, but the pace of the header took it past him.

That goal visibly deflated Derry, who were grateful for the half-time whistle as they began to cling on, and things didn't improve for them after the restart, as just four minutes into the second half they found themselves behind.

The goal came via a needless free-kick after Dunwoody shoved Akseli Kalermo to ground 35 yards out, giving Grigaravicius the chance to curl in a wonderfully teasing ball which was met by the unmarked Paulauskas, who guided his header into the bottom right corner.

Much like when Derry took the lead however, Riteriai began to sit back when they hit the front and the visitors enjoyed their best spell of the game with the lively Adam Hammill at the centre of everything they created.

It was Hammill who got the assist for the leveller on 63 minutes when his measured cross fell perfectly for Eoin Toal, who rose highest to flash his header past the static goalkeeper. 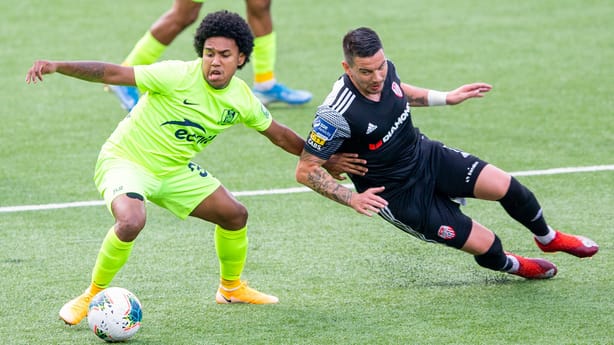 But that was as good as got for Derry and with both sides tiring as the game wore on, it was the hosts who were able to dig deepest and find a winner in extra-time.

They didn’t have to wait long for it either.

With the first half of extra-time just seconds old, Kazlauskas produced the best moment of the game when he collected the ball on the left edge of the Derry penalty area. With defenders backing off him and Cherrie slightly out of position, the Lithuania international took a touch to set himself before curling a sublime shot up and over the goalkeeper and into the top right corner.

Derry huffed and puffed after that, but the toil of the game was telling on their players, who looked exhausted.

The visitors did manage to create a couple of half-chances in the closing stages, with a cross from Harkin blazing across the face of the Riteriai goal and begging for a touch that wouldn’t come, and a weary Hammill fluffing his line when presented with a last-gasp chance, but the hosts managed to hold firm.