PSG beat Atalanta and RB Leipzig in the final eight in Lisbon, and Mbappe is feeling relaxed about the test against Bayern and the significance for French football.

"This is exactly why I came here," he told reporters on Saturday.

"I have always said that I wanted to make history for my country. This is a chance. When I arrived in 2017, we experienced several disappointments. Today, we are in the final and that shows that we have not given up.

"It would be a great reward to win with a French club. It was my mission when I came. Winning (on Sunday) would be incredible, it would be an achievement for a French club," Mbappe added.

Although only 21, Mbappe has already made himself a major part of French football history by winning the World Cup two years ago and he has compared the mood in the PSG squad to that of Didier Deschamp’s side in Russia.

Although the final will take place at the Estadio da Luz without fans, like all the games in the last eight due to Covid-19 restrictions, Mbappe says the atmosphere remains special.

"Of course, it feels strange to play behind closed doors but it’s still the Champions League. You can feel it the intensity of the matches, the tension that reigns. It was a very special format this year, we will remember it for a long time because of the tragedy," he said.

PSG manager Thomas Tuchel said fit-again Italian midfielder Marco Verratti could be involved in the game, although probably not the full match.

Verratti missed PSG’s quarter-final clash against Atalanta due to a sore calf, but came off the bench for the final eight minutes of the semi-final win over Leipzig.

"Marco’s injury was a blow, it wasn’t muscular, that’s why the risk isn’t great. It’s just a matter of pain. Does he have them ability to play 120 minutes? No, of course not. We have to decide tomorrow whether or not to start him," said the German.

Tuchel will also decide late on whether first-choice keeper Keylor Navas is ready to return or if he will stick with back-up Anthony Lopes. 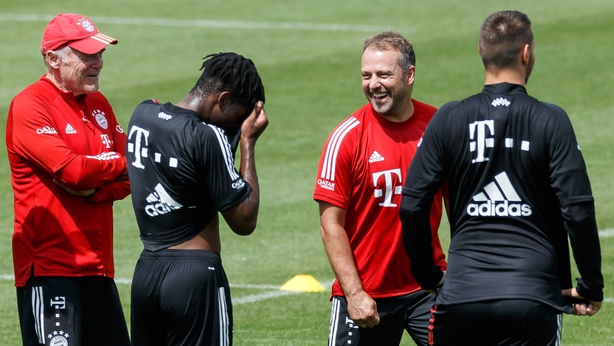 While PSG are looking for a first Champions League title, Bayern Munich are going for their sixth.

Bayern Munich boss Hansi Flick will stick with his winning formula despite the attacking threat posed by their opponents.

Many pundits feel Mbappe and Neymar will punish the German champions if they continue to play with their renowned high defensive line in Lisbon.

But Flick said at the pre-match press conference: "In our games over the last 10 months we've always tried to impose our style on the opposition and always played with a high line.

"Ultimately, we’ve got results doing that, so we won’t change too much on that score.

"What we’ve noticed firstly is the fact we’ve had this high line, we don’t necessarily want to give too much space to the opposition, but of course there’s quite a lot of space in behind our defensive line.

"What is important is we can press the opposition when we are in possession, we have to make sure we can cover all that ground when it goes behind.

"It’s important to cut out those passing lines and not give our opponent space to pass the ball into. They have pace and are a top team with incredible players."

Defender Joshua Kimmich will be among those tasked with keeping PSG’s front three at bay.

"We don’t know the starting XI at this stage, but I think I’m going to play right-back," he said.

"It might be Neymar and Mbappe on the right, they are very good going forward. But I don’t think we are going to sit too deep by any means.

"They have an enormous amount of pace that we will have to look out for, but we won’t shy away from it."

Jerome Boateng is Bayern's only injury worry ahead of the final after picking up a knock in the win over Lyon.

Niklas Sule replaced the 31-year-old at half-time in the semi-final and could be called upon again if Flick is forced to change his starting line-up.